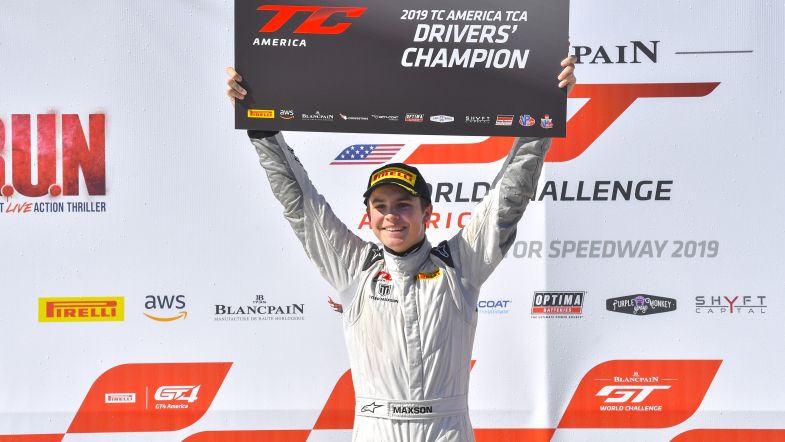 Tyler Maxson steps up to TCR class with Copeland Motorsports

Tyler Maxson will make the step up to the TCR class in TC America for the 2020 season after agreeing a deal to remain with the Copeland Motorsports team.

Maxson secured the TCA title at the age of just 15 after a dramatic season finale in Las Vegas saw him overturn an eleven point deficit to Nick Wittmer, taking the championship by just four points with a podium finish as Wittmer retired with engine issues.

Having taken the title in a Mazda MX5 run by Copeland, Maxson will now step up into the premier class next season at the wheel of a Hyundai Veloster N TCR, as raced by Mason Filippi in 2019.

Filippi took four wins in eight starts with the team during a part campaign that saw him also secure a double win in a TFB-entered Veloster during the season opener at the Circuit of the Americas.

“I am really excited to get behind the wheel of the Hyundai Veloster N TCR and show what I can do,” Maxson said. “I competed in TCA last year, ran alongside the Veloster N out of the Copeland Motorsports tent and was surprised on just how fast the car is. The team did a great job putting Mason Filippi on the top step of the podium several times, and I hope to be able to follow in his footsteps.

“Despite being a rookie in the TCR class, we have set our goals pretty high and will work hard to achieve them for myself, my team and the Hyundai brand. 2019 was great, but I would love to repeat or better those results in TCR in 2020.”

Team boss Dean Copeland said he was confident that the teenager can impress next season despite his young age.

“We welcome Tyler back to our team as he will be a threat for podiums and race wins again in 2020,” he said. “Tyler is fast, smart, calculated and knows when to be aggressive and when to relax on track. Having already been behind the wheel of the Veloster N at a recent test and showing extraordinary pace, I am expecting even bigger things out of him next season.”