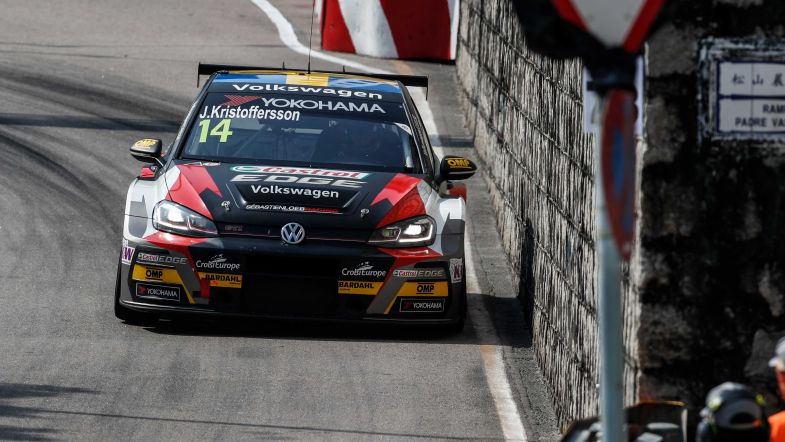 World Touring Car Cup qualifying sensation Johan Kristoffersson says he tries to soak up as much information as possible from SLR Volkswagen team-mate Rob Huff on his debut in Macau this weekend.

Kristoffersson was a star of WTCR qualifying at the fabled street track on Friday, reaching the Q3 shootout and comfortably taking honours as the leading Macau first-timer.

The Swede wound up slowest of the five Q3 runners after tagging the wall at Moorish Hill, but was still thrilled with his performance at what he labelled “a very special track”.

“It’s a fantastic result,” Kristoffersson said to TouringCarTimes. “I’m very happy. I couldn’t have dreamed of making Q3 on my first weekend here, especially not after missing a lot of track time in practice due to a gearbox problem. I learned a lot in Q1 and Q2, where I had a really great lap, and in the end it was a very, very good session. It’s a very special track.”

Speaking of his Q3 mistake, Kristoffersson said his lack of experience played a part and that he tried too hard to match the record pace set by Huff – who had elected to run first in the final qualifying segment.

“I just tried a little too hard,” said Kristoffersson. “On those last few laps when the track gets better and better, that’s where you need to have been here four or five times. I knew that Rob’s time [in Q3] was similar to what I had done in Q2, so I probably became a little bit too greedy. That corner is the second slowest on the track but I’ve been struggling with it all weekend. It’s the kind of thing you need to accept around here sometimes. At least I tried.”

Kristoffersson said learning from Huff – the most successful driver in the history of Macau’s Guia touring car race with nine wins to his tally – was key to his swift adaptation this weekend.

“Rob is the one to beat around here,” Kristoffersson elaborated. “At the end of the day it’s all about confidence and experience, driving closer and closer to the wall. I have the biggest ears in the paddock and try to pick up all the small details. There are no secrets between us, we share all the data, but it’s simply in the little details and the execution.

“He knows exactly where to stress the tyres to anticipate the grip level for the following corner. It all adds up. Where at a normal track you lose two-three tenths, here it’s easily eight tenths if you don’t get into that kind of flow. It looks a lot but in reality it’s really, really tiny details.”

Asked for his opinion on Macau’s Guia street track, Kristoffersson said it easily ranks among his favourites.

“It’s very high [on the list]. I think it’s the kind of track where, like Rob, you can really stake your authority. The track is very special. The Nürburgring [Nordschleife] is another one, but there it’s easy to practice, whereas here you only get one chance per year. Bathurst is another favourite where it’s also difficult to get mileage.”

The two-time world rallycross champion then offered a lighthearted end to the conversation by adding:

“Those are the three circuit racing tracks that top the list, but of course nothing comes close to rallycross in Höljes!”

Kristoffersson is due to start Saturday’s WTCR Race 1 at Macau from 15th on the grid, before taking up improved grid slots for the two Sunday races thanks to his Qualifying 2 performance.