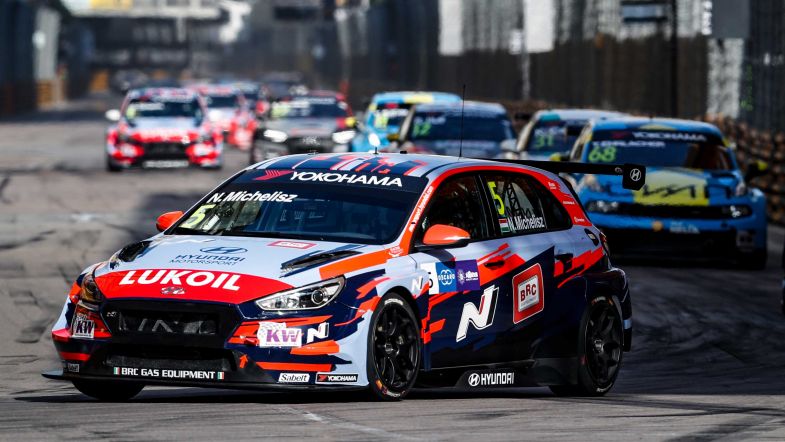 Norbert Michelisz says he needed to maximise the outcome of Saturday’s opening World Touring Car Cup race in Macau, with the new overall points leader expecting a difficult Sunday from the midfield.

BRC Hyundai driver Michelisz finished second in Race 1 at the Guia street track, half a second behind Lynk & Co’s Yvan Muller, and in doing so snatched the advantage in the WTCR title fight.

Michelisz now leads the standings by 18 points from Honda’s Esteban Guerrieri, with Muller another 18 points adrift in third. Muller’s team-mate Thed Björk is also firmly in the title chase.

However, with Michelisz forced out of the second qualifying session yesterday after ploughing into the back of Gordon Shedden’s Audi RS 3 LMS (which has since been withdrawn from the event), the Hungarian will start Sunday’s two races from 12th place – and knows he could be facing a difficult task in the middle of the pack.

“First of all, there are still five races to go,” said Michelisz as he played down the significance of grabbing the championship lead. “You saw that in Qualifying 2; we were a bit unlucky yesterday. I needed to take maximum points today. This is why I really tried hard, especially at the start to jump Yvan. But at the start, on the first lap and all the way he did a perfect job, so congrats to him.

“I really tried my best and he was quite strong in Sector 2. I was stronger in the last and first sector so I was always closing the gap under braking for Turn 3, but then he had an advantage compared to me. Anyway, important points. I think tomorrow will be a difficult day for us. Like I said, if it’s 18 points, 30 points or five points it doesn’t really matter so much right now. For me the most important thing is to have two clean races tomorrow and grab some points.”

After Macau, the WTCR finale takes place in Malaysia with the final three races of the season.