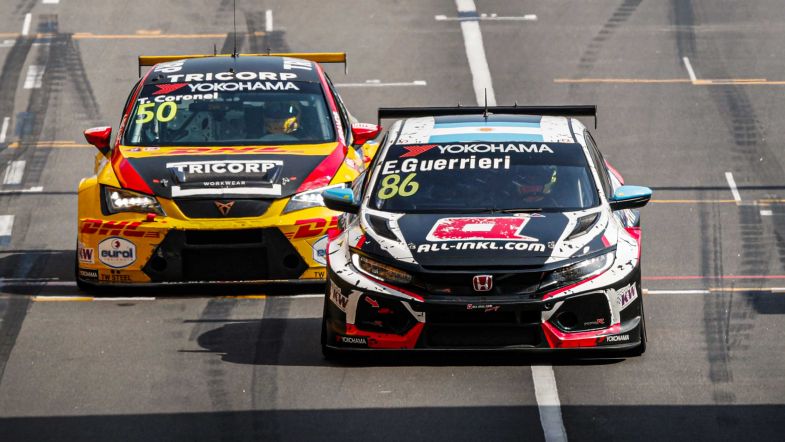 Esteban Guerrieri says he has achieved the target he set himself at the beginning of the World Touring Car Cup season and therefore can’t be too disappointed despite a difficult weekend in Macau.

The Münnich Motorsport-run Honda driver headed into the weekend at the top of the WTCR standings, but lost the advantage to new leader Norbert Michelisz due to a combination of penalties, technical glitches and poor pace.

Cyan Racing pair Yvan Muller and Thed Björk also moved drastically closer to Guerrieri in the standings, setting up a four-way fight for the title at next month’s Sepang finale.

Guerrieri, however, was not too downbeat when quizzed by TouringCarTimes on his emotions following the Macau event.

“It’s been a lot of hard work,” said the Argentinian. “Basically we extracted the best we had on our hands. I’m very proud of my team and we scored solid points with a fourth place and a tenth place today. Those points keep us alive [in the title chase]. We are in contention, which is what I aimed for at the beginning of the year, to be in contention for the final race.”

Guerrieri admitted to being left puzzled as to why the Honda cars struggled so much at the Macau street track, especially in terms of top speed on the long run through Mandarin and to Lisboa.

“Before coming here I expected to be a contender for wins and podiums, but I soon realised that something was not right,” Guerrieri conceded. “The Lynk & Co and Hyundai cars were so quick in the straight, which we don’t know why – I don’t want to get into that story of BoP or whatever, I let the category do their job. It’s just frustrating to be so much slower on the straight but I can’t really say much more because I don’t know.”

Guerrieri’s weekend in Macau got off to a bad start when an engine change put him to the back of the grid for Race 1, and he then picked up a separate three-place grid penalty for blocking Hyundai’s Nicky Catsburg in Qualifying 2 – which cost him pole on the partially-reversed Race 2 starting grid.

“All I wanted to do was keep my position to Catsburg because I wanted to do my lap behind the Lynk & Co cars [to get a tow],” said Guerrieri. “And I didn’t want to let Catsburg past because he is a team-mate from a title contender against me (Michelisz), so I don’t know what he could have done in front of me in qualy; block me or whatever. He tried to pass me and I tried to defend the position, which in my view was fair because I never changed lanes twice, just once. I think if it had happened in a race it wouldn’t be a penalty.”

The penalty statement from the stewards said Guerrieri had been seen “gesticulating” at Catsburg, but the three-time 2019 race winner did not agree.

“All I did was open my window and say to Catsburg [indicating with his fingers], ‘no, don’t try’ but I didn’t gesticulate to him. The stewards actually told me that they would give me a penalty for dangerous driving or whatever, but not because of the gesticulating, but then they put that in the final report even [though] it was not part of the penalty. Anyway, it’s nothing I can change.”

With just 28 points separating the four remaining title contenders heading into the Sepang finale, and 85 points still up for grabs in Malaysia, the WTCR battle will go down to the wire in a month’s time.

“In compensation weights we are going to lose quite a few kilos, so that for sure will help us,” Guerrieri concluded. “Still there are two longs straights there [at Sepang] so we will see if our performance is better or not…”