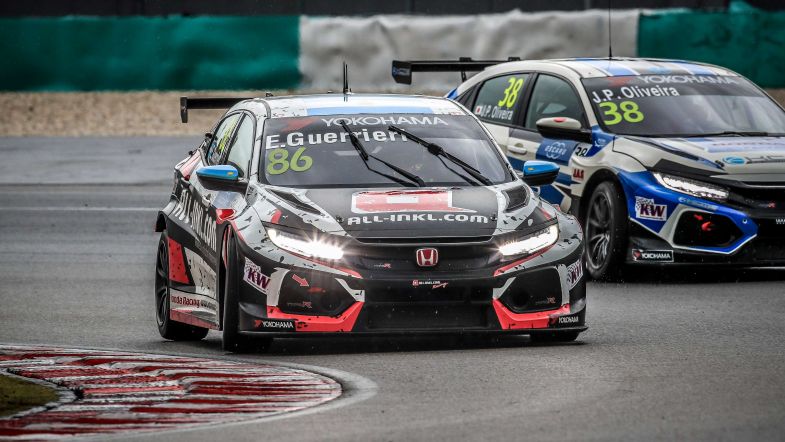 Esteban Guerrieri closed the gap to championship leader Norbert Michelisz to just ten points thanks to a storming victory from ninth on the grid in a frantic second race of the World Touring Car Cup finale at Sepang, setting up a dramatic title climax.

Guerrieri laid the foundation for his victory with an assertive rise from ninth to first on the opening lap of the race, although an incident between Nicky Catsburg and a furious Yvan Muller eventually saw the race stopped further around lap one as Catsburg’s Hyundai i30 N TCR caught fire.

The race was suspended for over an hour while confusion arose regarding the restart procedure, but the decision was finally made to count back the order to the standings at Sector 2 of the opening lap, where Honda’s Néstor Girolami had still been leading before letting team-mate Guerrieri past a few corners later.

As such, Girolami led away at the restart, but swiftly let Guerrieri past for a lead the Argentinian would never surrender.

Guerrieri had built a massive 12-second lead when the safety car was called with just two laps remaining after Attila Tassi’s Honda ground to a halt.

Guerrieri’s lead was wiped out, but the race went on to effectively finish under safety car conditions, meaning Guerrieri was never threatened.

Behind, Kristoffersson was on inspired form, climbing through the field from his lowly grid slot. The flying Swede hauled himself onto the podium thanks to a bold statement around the outside of Girolami at Turn 4 on lap nine, completing a move that had been in the works for half a lap as the duo slid door to door around Sepang’s slippery corners.

Kristoffersson then looked on course to challenge fellow WTCR rookie Azcona for second place in the closing stages, but the safety car intervention ensured that battle never materialised.

Girolami slipped to fourth having initially run second behind Guerrieri, trying his best to hold up the competition while his fellow countryman built his lead.

Kevin Ceccon took fifth for Team Mulsanne Alfa Romeo, while Lynk & Co Cyan Racing’s Muller (who managed to make the restart following the Catsburg clash) finished sixth and thus is out of championship contention. His team-mate and nephew Yann Ehrlacher was seventh.

Michelisz finished eighth, having gone off the track just before the initial red-flag stoppage, with the title scrap now an outright fight between the Hyundai driver and Honda racer Guerrieri – who are poised to share the front row of the grid in the all-deciding final race of the season later this evening.

The title-decider has been postponed from its original start slot given the time-consuming developments of Race 2, but is expected to take place as soon as the necessary official post-race checks have been carried out and teams have turned their cars around for the season finale.