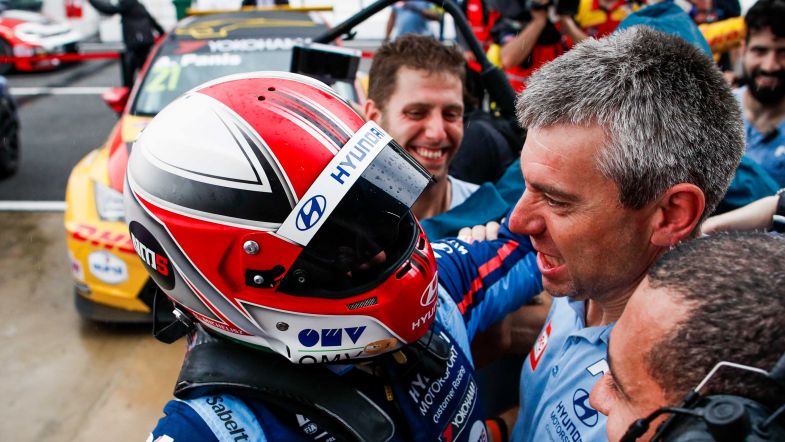 Norbert Michelisz clinched the 2019 FIA World Touring Car Cup title with fifth place in a tense final race of the season at Sepang, while Johan Kristoffersson pulled off a masterclass drive to claim victory from 21st on the grid.

The race initially featured an ultra-dramatic battle between Hyundai’s Michelisz and Honda-powered title rival Esteban Guerrieri, who shared the front row of the grid in a Hollywood-scripted beginning to the season decider.

Michelisz and Guerrieri battled it out for the lead in the opening stages, joined by 2019 rookies Mikel Azcona and Kristoffersson – who incredibly came through from 21st place at the start to run a sensational third at the end of lap one.

Volkswagen racer Kristoffersson had originally qualified 22nd, but inherited one spot on the grid when Hyundai’s Nicky Catsburg picked up the first race ban in WTCR history prior to the start.

Azcona challenged Guerrieri for the lead just as the safety car was deployed at the beginning of lap two to account for the spun Hyundai of Augusto Farfus, and the top quartet continued their entertaining tussle at the restart.

The squabble came to a head on lap five when Azcona and Guerrieri disputed the lead for several corners – ultimately making contact as Azcona tagged Guerrieri’s Honda Civic Type R on the stretch between Turn 11 and Turn 12. The Argentinian was sent onto the grass, but rejoined at the next sequence of corners, where a spectacular four-wide scrap ensued for the lead with Azcona temporarily coming out on top.

Guerrieri’s car had sustained damage in the tag from Aczona’s Cupra, however, and simultaneously with another safety car situation on lap eight when Gordon Shedden’s Audi RS 3 LMS spun into the gravel, Guerrieri began to slow.

He came into the pits two times as his Münnich Motorsport team attempted to rectify the issue, but it was not to be and he later pitted a third time – retiring for good.

Guerrieri’s retirement meant Michelisz – who was nursing his own technical issues after his Hyundai stopped on the way to the grid before the start – could simply bring it home in fifth place to seal his first world touring car title.

Up front, meanwhile, Kristoffersson jumped at the opportunity at the restart following the Shedden-induced safety car, snatching the lead from Azcona with a super-late dive into the final corner on lap 11.

Kristoffersson then pulled away over the last three laps, taking his third WTCR victory and coming just one point shy of beating Azcona to rookie of the year honours as Volkswagen bowed out of the series on a significant high.