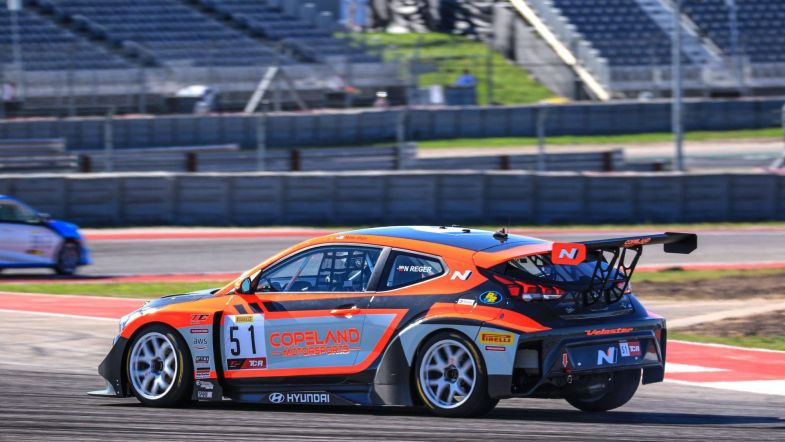 Nikko Reger secures pole at Circuit of the Americas

Nikko Reger emerged on top of the pile to secure the first pole position of the TC America season in a tricky qualifying session at the Circuit of the Americas.

Damp circuit conditions greeted the teams for the 15 minute session that will determine the grid for race one later today, and resulted in a wide spread of times across the eight-car TCR field.

Reigning TCA champion Tyler Maxson had been the man to beat through both free practice sessions at the wheel of his Copeland Motorsports-run Hyundai Veloster and was the early pace-setter in the session, albeit with a time more than ten seconds slower than his practice best.

As circuit conditions improved, so the lap times started to tumble, with Reger briefly taking a turn at the top before Maxson went fastest of all in the first and last sectors to set a realistic benchmark of 2:21.809s.

Reger, in the sister Hyundai, then bettered that time with a storming lap of 2:18.886s, which made him the first driver of the weekend to break the 2:20s barrier and put him well clear of Maxson.

Even though he then bailed out of his final timed lap, Reger’s time would prove to be unbeatable, with Maxson’s final lap of the session still more than six-tenths of a second behind his team-mate.

The Hyundai pair were comfortably clear of the two FCP Euro-entered Volkswagen Golf GTI TCRs, with Nate Vincent just under two seconds off the pace in third and defending champion Michael Hurczyn in fifth.

Victor Gonzalez, a two-time winner in a part campaign last season, was fifth in his Honda Civic Type R, albeit with a best time more than five seconds away from pole.

The remaining three cars in the TCR class would endure challenging sessions on track that mean they will start amongst the TC class cars, with Honda pair Scott Smithson and CJ Moses down in tenth and 13th overall and Roy Block’s Alfa Romeo only managing 14th overall; having run inside the top four in both practice sessions.