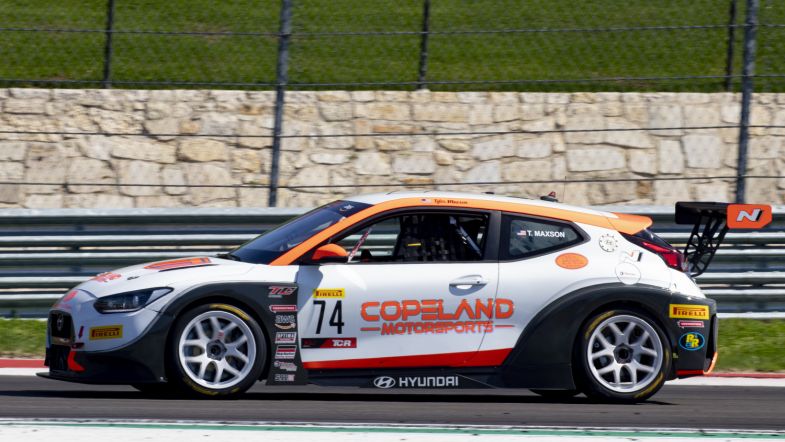 Reigning TCA champion Tyler Maxson celebrated his first outing in the premier class of TC America with victory in the opening race of the season at the Circuit of the Americas.

Having missed out on pole position, Maxson made the best start when the race got underway to take the lead from polesitter Nikko Reger going through turn one, and then set about trying to build a lead over his team-mate – who in turn was trying to keep Nate Vincent’s Volkswagen at bay.

Behind however there was drama for Victor Gonzalez as he suffered a spin at turn one and was clipped by Roy Block, putting Block out with suspension damage on his Alfa Romeo.

Gonzalez would manage to recover to the pits with a similar issue and although he would later manage to rejoin, any chance of a strong result was gone.

Having shaken off Vincent through the opening lap, Reger set about trying to reclaim top spot from his Copeland Motorsports team-mate and took time out of Maxson on both the second and third laps to bring the lead down to under half a second.

A full course caution was then thrown to allow a number of cars from other classes to be recovered from the circuit, but it was Maxson who benefitted on the restart as he set the fastest lap to quickly build take a lead of six-tenths of a second.

Behind the two Hyundai Velosters, Vincent continued to run third ahead of defending champion Michael Hurczyn, although the FCP Euro VWs were proving to be no match for the two cars ahead.

As the race wore on, so Maxson gradually extended his advantage and even when he came across the TCA class tail-enders, the youngster was able to hold his nerve and would secure victory by just under three seconds.

Posting the fastest lap of the race also ensured that Maxson will start Sunday’s second race from pole.

Reger ensured a perfect start to the season for Copeland with second place, with Vincent a lonely third – unable to stay with the top two but having the measure of Hurczyn who started the defence of the title with fourth.

Honda pair Scott Smithson and CJ Moses rounded out the top six, albeit well behind the top four, whilst Gonzalez would take the flag three laps down after his lap one dramas.