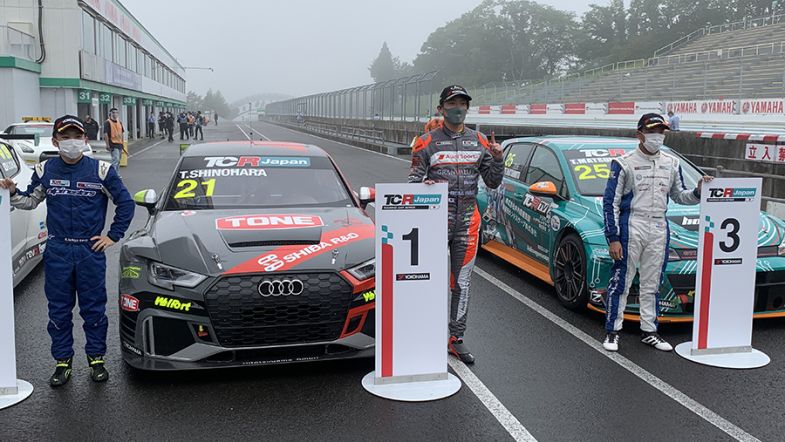 The qualifying sessions were cancelled due to heavy fog over the Sugo circuit, with the grid decided by lottery.

The start of the race was also delayed by more than one hour due to the fog and Shioya went off the track during the warm up session ahead of the race, but was able to recover under his own power.

Shioya took the lead as the lights finally went to green, followed by the Volkswagen Golf GTI TCR drivers of Hirobon (BRP) and Takeshi Matsumoto (Teamwakayama).

Before the end of the first lap, Matsumoto took the lead, with Hirobon also overtaking Shioya.

Shioya continued losing positions, first to Shinohara’s Audi RS 3 LMS, and then to the CUPRA TCR of Kengo Ichijo.

Shinohara then overtook Hirobon for second place, while Matsumoto had opened up a healthy lead.

In the second half of the race Shinohara closed the gap to Matsumoto. The Audi driver tried overtaking on the outside at Turn 1, but the Matsumoto closed the door. Further behind, Ichijo claimed third place.

Shinohara recovered the lead not long after, as the leading trio started to make contact with backmarkers. This enabled Hirobon, in fourth place, to close the gap to the leaders.

Shinohara claimed the victory as the chequered flag fell, just four tenths of a second ahead of Ichijo, with Matsumoto completing the podium three seconds behind. Hirobon was fourth, followed by Shioya and Honda driver Rio Shimono.