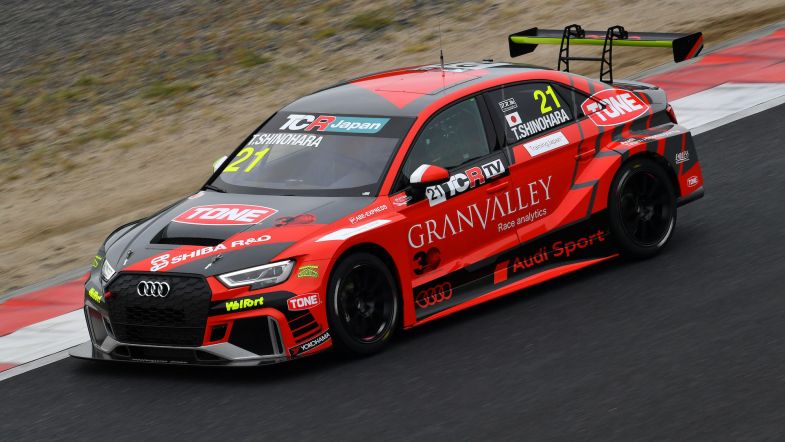 Takuro Shinohara continued his domination of the TCR Japan Saturday Series after completing a straight-forward lights-to-flag victory at Autopolis.

The Audi Team Hitotsuyama driver was untroubled from pole position en route to his fourth Saturday win in as many races this season.

Birth Racing Project BRP’s Hirobon was a distant runner-up in his Cupra, some 11.022s behind at the flag.

TeamWakayama Volkswagen driver Takeshi Matsumoto just held onto third at the line, after a superb defensive effort throughout the 12-lap race, beating Resshu Shioya’s Honda by a mere three-tenths of a second.

Off the line, Shinohara got a good start and led Hirobon and Matsumoto into the first corner, while Rio Shimono stole fourth from Shioya before the end of the opening lap.

Shinohara quickly opened up a healthy margin of just over three seconds on Hirobon as Matsumoto started to come under pressure from Team G/MO Honda’s Shimono.

Shimono, while never seriously looking like making an overtake, had a run on Matsumoto heading into Turn 1 approaching half-distance, but ran wide at the apex and dipped a wheel onto the gravel.

This allowed Shioya to nip past on the exit and take up the fight to Matsumoto ahead.

Try as he might though, Shioya had as much luck as Shimono as Matsumoto remained in front, with the latter producing a stubborn defensive effort to hang onto the final podium position until the end.

Shioya got a better run on Matsumoto coming out of the penultimate corner leaving the Honda driver right on the tail of the VW coming through the final kink. The pair almost went side-by-side over the line, with Matsumoto prevailing by 0.301s.

Okura indeed, was a long way ahead of Naoto Takeda’s KCMG Honda Civic Type-R TCR who was some 23 seconds in arrears, while narrowly fending off Junichi Umemoto’s J’s Racing Alfa Romeo for seventh.

Umemoto’s team-mate Mototino finished eighth, but was involved in an incident with Birth Racing Project BRP’s Kenji Suzuki two laps from the end, which sent Suzuki into the Turn 1 gravel trap.

The second race of the weekend at Autopolis is scheduled to take place on Saturday at 09:35 local time (01:35 CET).