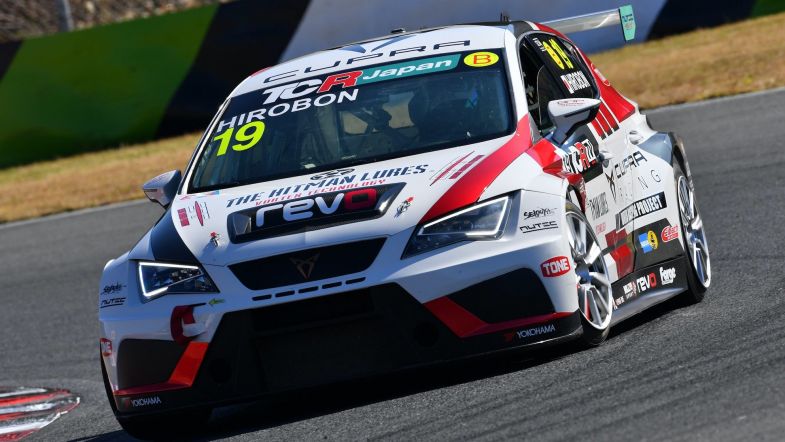 Birth Racing Project BRP’s Hirobon profited from a late-race mechanical drama for Takuro Shinohara to claim his first TCR Japan victory of the season in Race 2 at Autopolis.

The Cupra driver had been a distant second to Shinohara throughout the 20 minute plus one lap race, before the latter slowed dramatically on the main straight on the ninth lap of 12.

Takeshi Matsumoto picked up his second podium of the weekend in second in his TeamWakayama Volkswagen Golf GTI after fending off a spirited attack from Resshu Shioya’s Honda Civic Type-R TCR on the final lap.

Shinohara initially bogged down off the line from pole position, but just about maintained his advantage over Matsumoto into the first corner.

Hirobon then squeezed past Matsumoto on the exit of Turn 1 to grab second, while the fast-starting Rio Shimono – who had briefly challenged for the lead from the second row of the grid – fell back into fifth.

Shinohara quickly opened up a lead of over three seconds on Hirobon and looked in total control as he extended his margin over the Cupra to nearly five seconds approaching half-distance.

Then, inexplicably, the Audi RS 3 LMS slowed on the main straight, which enabled Hirobon to sweep past into the lead under braking for Turn 1.

Hirobon was then untroubled en route to victory which he secured by 3.199s over Matsumoto.

Matsumoto beat Shioya to the runner-up position by just half a second after a superb late battle. Shioya arguably had the faster car but could not find a way around the Volkswagen.

The pair ran nose to bumper inside the closing two minutes, with a small mistake exiting Turn 3 allowing Matsumoto the necessary breathing space to secure secure at the line.

Hirobon’s team-mate Kenji Suzuki recovered from a poor qualifying to finish eighth, while Shinohara did eventually make it to the finish in ninth.

The pair of J’s Racing Alfa Romeos had a difficult race with Mototino finishing tenth and three laps down, while Junichi Umemoto was the race’s only retirement.

The next round of the TCR Japan season takes place at Suzuka on the weekend of the 5-6th December.