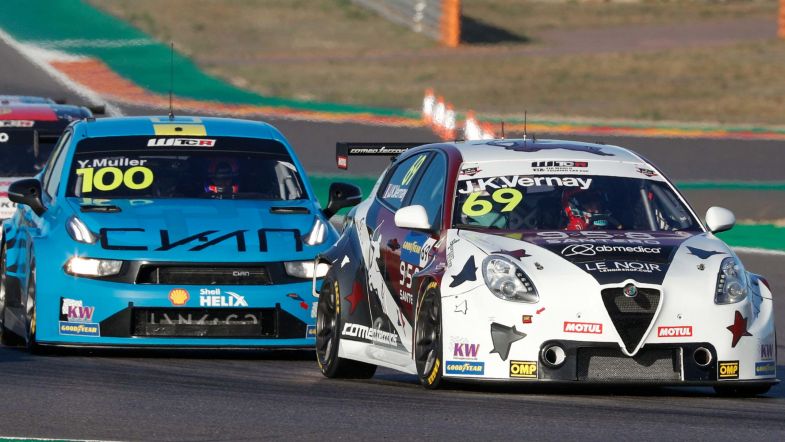 Jean-Karl Vernay was critical of the tactics deployed by rival teams in the WTCR season-finale at MotorLand Aragón, after narrowly missing out on the runner-up slot in the championship.

Competing for the small Team Mulsanne operation, Vernay was up against the might of the four-car Cyan Racing and Münnich Motorsport teams respectively as he disputed second in the standings with Yvan Muller and Esteban Guerrieri.

It all came down to the tiniest of margins in the final race of the year, with Vernay finishing ahead of both Muller and Guerrieri on the road.

However, both Muller and Guerrieri were helped by team-mates moving over, allowing them to make up the necessary ground to take second and third respectively in the standings.

Muller eventually finished just one point clear of Guerrieri, who in turn tied with Vernay on points but took third on countback of race wins.

Vernay, who is driving Team Mulsanne’s sole full-time Alfa Romeo, was not impressed by the antics when asked for his comments after the race.

“First of all, congratulations to Yann (Ehrlacher, new champion),” said Vernay. “I’m very “Frenchy”, and a Frenchman winning the title is well deserved.

“About today, we lost the overall podium for nothing, just because some guys are swapping positions all the time. It’s understandable, but not very classy. That’s how they play. It’s difficult to swallow.”

Vernay went on to point out that Guerrieri was facing an investigation from the stewards for possible track limits abuse, which could still promote him into the top three.

“I think he [Guerrieri] is under investigation, and I’m confident the stewards will do their job. It’s not finished and I hope to get a nice surprise later today.”