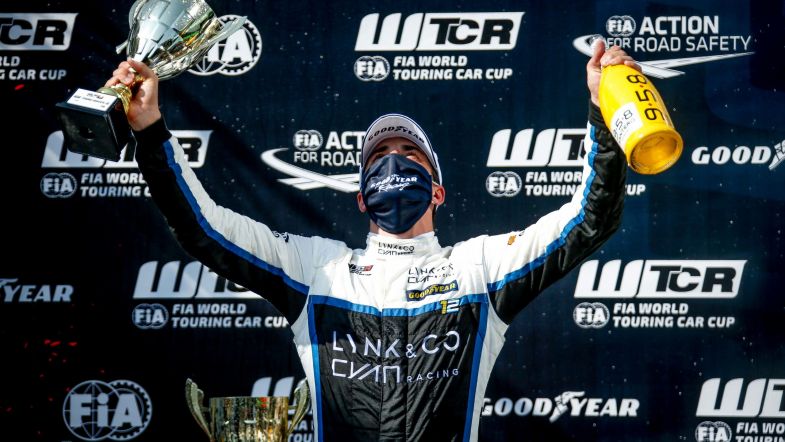 Santiago Urrutia left it until the last possible moment to clinch a victory during his rookie WTCR campaign, winning the final race of the 2020 season at MotorLand Aragón.

Urrutia started on pole and controlled proceedings from the front, leading all 12 laps to score arguably the biggest win of his career to date. The Uruguayan becomes the eleventh different WTCR winner from 16 races this year.

Urrutia led home Lynk & Co Cyan Racing team-mate Yann Ehrlacher, the new champion, in a solid 1-2 to cap off the season – and the Swedish/Chinese squad celebrated yet more success further down the order.

That was because Yvan Muller climbed up the order from tenth on the grid to finish fourth, which proved enough – just – to snatch second place in the championship behind nephew Ehrlacher.

The battle for runner-up honours provided most of the entertainment in the race, with Muller, Esteban Guerrieri and Jean-Karl Vernay all squabbling for crucial points.

Vernay was the top finisher of the trio in third, picking up his second podium of the weekend, but that was still not enough for the impressive Frenchman in Team Mulsanne’s unfancied Alfa Romeo Guilietta Veloce TCR.

Instead, Cyan Racing played the team game to perfection in a synchronized move initiated by Thed Björk.

Björk ran in P4, two spots ahead of Muller, with Cupra’s Mikel Azcona sandwiched between the two Cyan team-mates as the trio approached the tight Turn 16 hairpin on lap five.

Björk hung Azcona out on the entry to the corner, denying him the apex, which allowed Muller to take the inside line and pass both in a single move.

Further behind, Guerrieri gave it his all to try and make up the necessary ground, picking up two warnings for track limits abuse in the process, and was thrown a lifeline on the final lap when Honda team-mate Attila Tassi slowed to let him past.

It still wasn’t quite enough, however, with Muller snatching the runner-up slot by a single point.

Guerrieri did salvage P3 in the championship, though, but only on countback of victories after tying with Vernay on points.

It was a difficult last race of a similarly arduous season for the Hyundai teams, with out-going champion Norbert Michelisz the top finisher in seventh place. Gabriele Tarquini and Luca Engstler took 14th and 15th, while Mitchell Cheah retired.

Two drivers were unable to take the start in the final race of the year, and they were both Argentinians.

After suffering an engine failure in Race 2, Münnich Motorsport could not repair Néstor Girolami’s Honda in time for the finale.