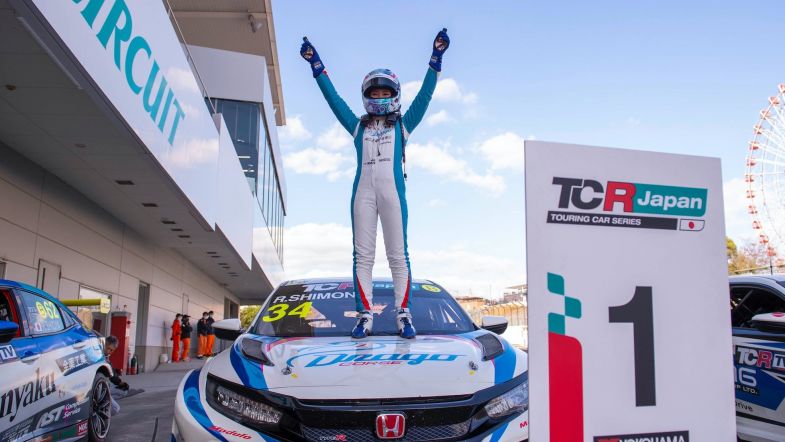 Drago Corse’s Rio Shimono took her maiden TCR Japan series victory in the second race of the weekend at Suzuka, after contact between points leaders Takuro Shinohara and Takeshi Matsumoto on the first lap.

Shimono started on the outside of the front-row for the Saturday Series race but got a better start than Race 1 winner Shinohara and led every lap en route to a comfortable win.

Resshu Shioya claimed second by just over half a second from Takuya Shirasaka to complete a Honda one-two-three of the podium places.

Much like Friday’s opening race, pole-sitter, Shinohara got a poor getaway off the line, getting beaten by the Honda of Shimono into the first corner.

Shinohara and Matsumoto then made contact, sending both spinning around while also delaying Hirobon who had to take avoiding action before he too retired on the opening lap after pulling off at Spoon Curve.

Mineki Okura also rotated at Turn 1 in his Alfa Romeo, dropping to the back of the field which was quickly reduced to just eight cars.

Despite the chaotic opening tour, the race continued without the deployment of the safety car, which left Shimono out in front comfortably ahead of Shioya’s Team G/MO Honda Civic Type-R TCR.

With the favourites for victory now out of the equation, it was the battle for second place which produced the most entertainemt of the race, with Shirasaka putting the pressure on Shioya.

Shirasaka had the faster car but could not find a way past Shioya, who defended admirably throughout the race and ultimately held onto second by just over half a second at the flag.

Their squabbling allowed Shimono to extend her lead at the front to over seven seconds, with the Drago Corse Honda driver proving unflappable at the head of the field. The margin was even more by the finish, Shimono coming home 13 seconds ahead.

Behind the podium finishers, Kenji Suzuki made the most of the first lap chaos to climb to fourth in his Birth Racing Project BRP Audi RS 3 LMS, while Mototino recovered from a disappointing first race to end up fifth.

His Alfa Romoe stablemates Okura and Junichi Umemoto followed behind while Matsumoto was the last classified finisher one lap behind.

The third and final race of the weekend at Suzuka – Friday’s opening race being the replacement round for the cancelled Sunday Series race at Sugo – is scheduled to take place tomorrow at 10:50 local time (02:50 CET).