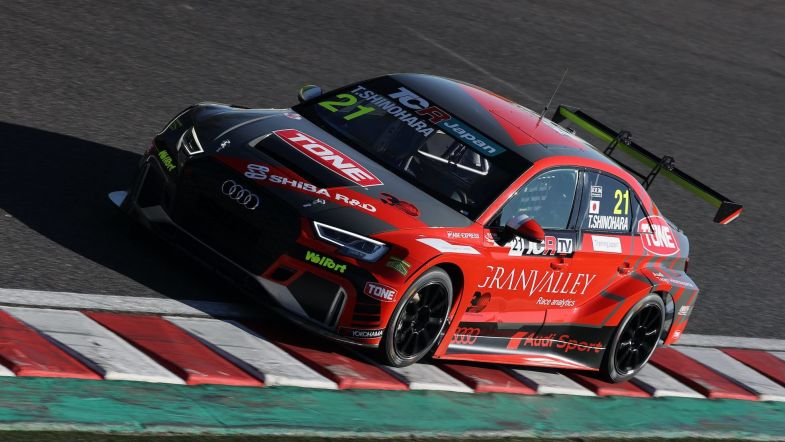 Takuro Shinohara returns to the top with Suzuka Race 3 win

Audi Team Hitotsuyama driver Takuro Shinohara bounced back from his Race 2 retirement with another commanding TCR Japan victory in the Sunday Series race at Suzuka.

Shinohara, who won the rescheduled Sunday Series race from Sugo on Friday from pole, was again untroubled en route to his seventh win of the year but just his third Sunday Series triumph.

Having taken his third pole of the weekend, Shinohara converted his front-row start into the lead by the first corner, ahead of Matsumoto and Hirobon.

It was a far cleaner start to the race than the Saturday Series encounter, with all nine starters making it through the opening lap unscathed.

There was meant to be 10 runners, but the Alfa Romeo of Junichi Umemoto pulled off with an unknown mechanical issue and did not take the start.

Shinohara’s pace out of the blocks was again impressive, with the Audi RS 3 LMS driver opening up a lead of 1.442s over Matsumoto, who while not able to match the leader was still comfortably ahead of Hirobon’s Cupra.

The closest battle in the race was for fourth place with KCMG Honda Civic Type-R driver Takuya Shirasaka withstanding increasing pressure from Resshu Shioya and Mineki Okura for the majority of the race.

Shirasaka held on to maintain his fourth place by the flag, as neither Shioya nor Okura could find a way by the Honda in the closing stages.

Shinohara’s victory margin by the end was reduced to just under fourt seconds by Matsumoto by the Audi was never threatened throughout.

Behind Okura in seventh was the 55MOTO with J’s Racing Alfa Romeo of Mototino, ahead of the last classified runner to reach the flag, Kenji Suzuki’s Audi RS 3 LMS.

Race 2 winner Rio Shimono had a difficult time and was five laps down by the end.

Shinohara heads the Sunday series standings on 120 points with Matsumoto second on 119 points.

Next up is the season finale on December 19-20 at Fuji International Speedway.