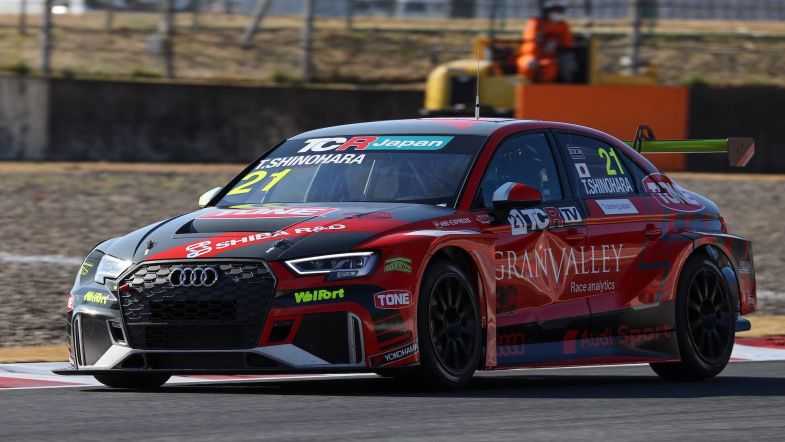 The Audi RS 3 LMS driver, who secured the Saturday Series title last time out at Suzuka, picked up his fourth Sunday win of the season in comfortable fashion from pole position, beating Birth Racing Project’ Hirobon to the line by 4.402 seconds.

His chief title rival, and last year’s Sunday Series champion Takeshi Matsumoto, started the final race of the year just three points behind Shinohara but could only manage third at the finish.

Off the line, Shinohara was passed by the fast-starting Hirobon as the field negotiated the first corner, with Matsumoto maintaining his third place.

Further back, the two J’s Racing Alfa Romeos of Junichi Umemoto and Mototino spun in unison at Turn 3, with both dropping to the back of the field. Umemoto’s race didn’t last long afterwards, with the Bronze class driver pulling off after Turn 1 on the fourth lap with a front-right wheel problem.

Hirobon led by just over three-tenths of a second from Shinohara at the end of the opening lap, but Shinohara put his Audi RS 3 LMS right back onto the tail of the Birth Racing Project Cupra before long and lunged down the inside of Turn 4 to snatch the lead.

Hirobon fought back on the exit and reclaimed the advantage but Shinohara’s pace was too much and the Audi seized back the lead for good under braking for the Turn 6 hairpin three-quarters of the way around the second tour.

Despite qualifying fourth on the grid, Saturday Series Bronze champion Rio Shimono started from the back of the field, but quickly made progress in her Drago Corse Honda Civic Type-R.

The only female driver in the series made five positions on the opening lap and soon latched onto the back of Resshu Shioya’s Team G/MO Honda for fourth.

With Matsumoto needing to beat Shinohara in order to retain his Sunday Series title, the Volkswagen driver’s efforts were not helped by the charging Shioya behind, who began to pile the pressure on inside the closing six minutes for the final place on the podium.

Shioya was able to use the straight-line speed of the Honda to pull alongside under braking for the first corner, with the pair running side-by-side through Turns 2 and 3.

Matsumoto held off that attack and duly took third at the finish ahead of Shioya, Shimono and Mineki Okura’s Team Stile Corse Alfa Romeo.

Shinohara was unchallenged after passing Hirobon and headed the Cupra driver to the line by just over four seconds at the flag.