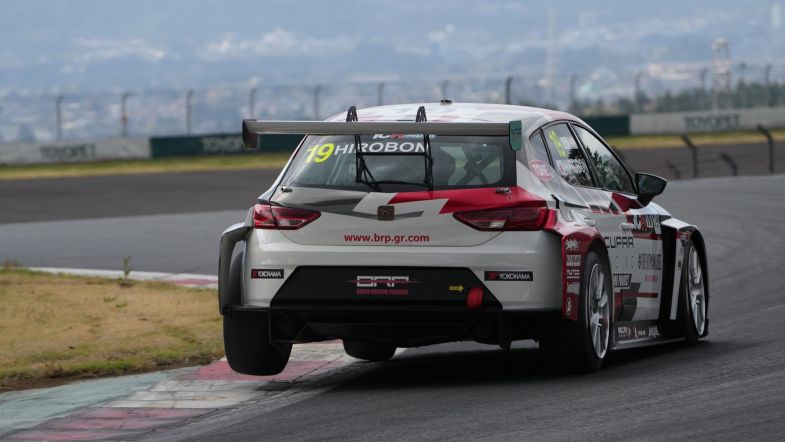 Birth Racing Project’s Hirobon took an early lead in the TCR Japan series standings after recording a win and a third in the opening round at Fuji Speedway.

The Cupra driver had crossed the line first in the opening Saturday Series race of the year, but was penalised for jumping the start, which handed the win to NILZZ Racing Audi’s Keiichi Inoue.

But Hirobon would not be denied in Race 2, beating Audi Team Mars’ Masanobu Kato by nearly five seconds.

For Saturday’s first race, Hirobon edged a tightly-fought qualifying session to take pole for the opening 12-lap encounter, beating Fujii by a little over six-hundredths of a second.

He then converted brilliantly off the line at the start to lead comfortably into the first corner, while Fujii dropped to third to Keiichi Inoue after a poor getaway from the front-row.

Fujii battled back past Inoue on the second lap after diving down the inside of his fellow Audi RS 3 LMS driver under braking for the final corner. The pair went side-by-side down the main straight, with Fujii sealing the move by Turn 1, the TGR Corner.

Inoue was then forced to defend heavily from Masanobu Kato’s Audi, who eventually made it through into third before the half-way point.

Out front, Hirobon was in a league of his own and duly opened up nearly five seconds of margin over Fujii, but a safety car caused by Kato spinning off at Turn 1 bunched the pack up again with just over two minutes remaining.

The race resumed with just one lap left, with Hirobon coming under immense pressure from Fujii on the run into Turn 1. Fujii pulled alongside as the pair braked for the corner, but the Audi locked up and ran wide.

Hirobon took the win on the road ahead of Fujii, but it was Inoue who inherited the victory after both Hirobon and Fujii received 30-second time penalties for jumping the start.

Fujii started Race 2 from pole position, with Hirobon alongside, but a near-stall meant that he was engulfed by the entire field off the line, allowing Hirobon to assume the lead.

Kato initially went with Hirobon and remained with a second adrift of the Cupra, posing a real threat on the long run down towards the first corner.

But Hirobon resisted and began to open up a healthy margin over the remaining laps to ease away to a 4.606s victory.

Okura finished third in the Alfa following a terrific second half of the race, in which he re-took Nakaya for fourth and then closed on, and passed Jun Sato’s Adenau IDI Volkwswagen Golf GTI after several attempts.

Sato then fell behind the recovering Fujii who finished a superb fourth, completing a great drive in his Audi Team Hitotsuyama RS 3 LMS.

The second round of TCR Japan is scheduled to take place on 15-16th May at Autopolis.