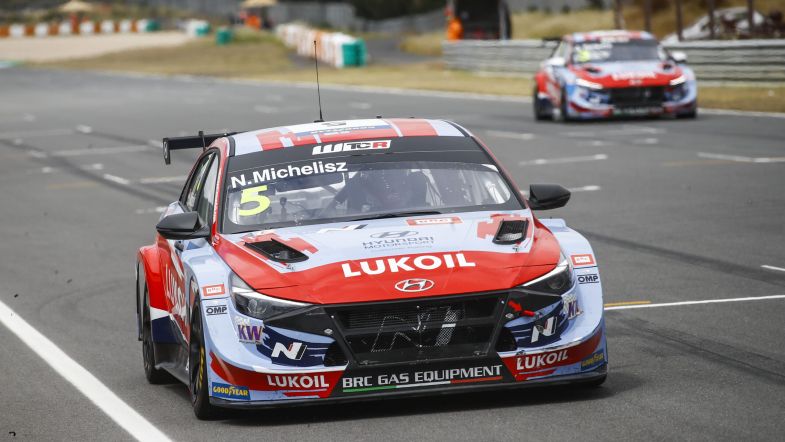 Norbert Michelisz: “We have the tools to score a lot of points in Aragón”

2019 WTCR champion Norbert Michelisz has had a tough start to the 2021 season and is currently placed tenth overall.

But the Hungarian modestly positive ahead of this weekend’s races in Spain after scoring a podium finish in the second race at Estoril.

“We have done some testing there so I think we are prepared, but it is very difficult to tell exactly what effect the compensation weight coming into play will have,” said Michelisz.

“I think we will have a slightly heavier car than before but our package is good enough for us to fight for top-ten positions in qualifying. My aim is to be in that top-ten and then have two clean and clever races. We have the tools to score a lot of points in Aragón.”

The Hyundais will carry more weight in Spain, receiving an increase of 10kg BoP weight, as well as 40kg of compensation weight.

“The compensation weight will start to take effect at this event but I believe that the great experience we have on this circuit and the specific tests we have carried out will allow us to compensate for this disadvantage,” said BRC team principal Gabriele Rizzo.

Michelisz’s team-mate Gabriele Tarquini has also had a tough start to the season, dropping out while leading the first race in Portugal due to a puncture and is placed 12th overall.

“Aragón is a track we know very well after racing there twice last year. Everybody in the paddock is familiar with the circuit. I personally like it very much, it is one of my favourite tracks,” said Tarquini.

“Normally it is a very exciting race for the fans with a lot of overtaking opportunities in nearly every corner or braking zone. I hope that we can have these good moments with the speed and pace of the car, but the priority is to collect much more points than we have in the first two rounds of the season.”