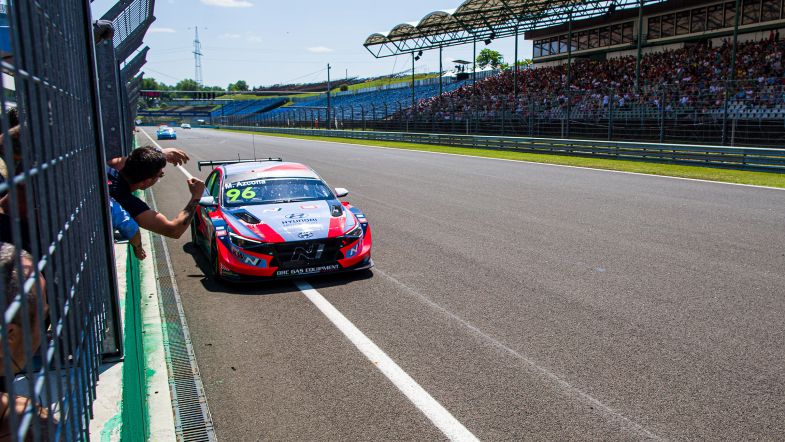 Mikel Azcona: “I made no mistakes”

Hyundai driver Mikel Azcona had a strong WTCR weekend at the Hungaroring to climb to the top of the championship.

The BRC Motorsport driver claimed pole position on Saturday, making the most of the hot and difficult track conditions in a Q3 session where two rivals had their lap times deleted for exceeding the track limits.

The Spaniard got a good start to the race, moving to the inside of the track to defend his position and come out of the first two corners in the lead.

“I did my best from the start and tried to defend at T1 and T2 which is normally where all the overtakes happen,” Azcona explained after the race.

“But, in the end, we had a fair battle in T1 and T2 and I took the inside which is the best position.”

The Hyundai driver controlled the race from that point on.

“It’s always easier when you are in front and you have clear air, where you don’t have cars in front. In the end I tried to use this opportunity and it worked,” said Azcona.

“No mistakes, tried to save the car and the tyres until the end of the race and I’m very happy. Thanks to the team, the car was working amazing and I have to say the front tyres were amazing.”

Azcona started Race 2 from tenth spot on the reversed grid, settling behind Comtoyou Racing’s Nathanaël Berthon (Audi). On lap four, they both overtook Esteban Guerrieri, with the Hyundai driver battling with Berthon until the chequered flag.

Berthon was subsequently penalised for cutting the chicane, with Azcona finishing the race in eighth place.

After the races in Hungary, Azcona heads to his home race at Motorland Aragón in two weeks’ time as championship leader with 85 points, ten ahead of Néstor Girolami (Honda) and 16 over Santiago Urrutia (Lynk & Co).