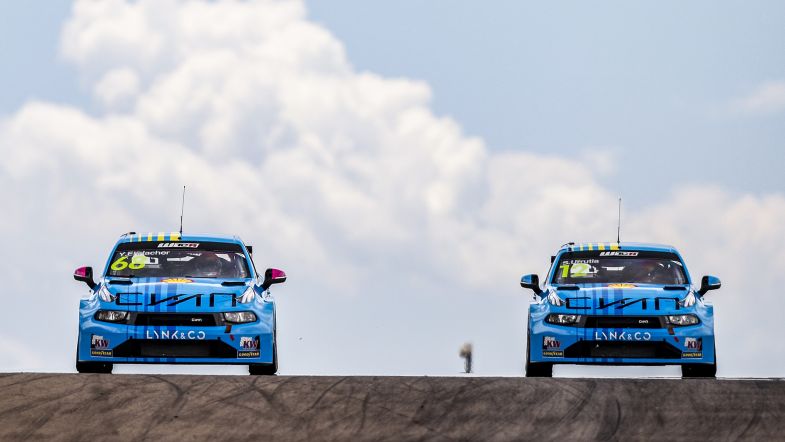 Marcello Lotti – the president of TCR promoters WSC – and Discovery Sport Events have expressed surprise at the decision by Cyan Racing Lynk & Co to suspend its involvement in the FIA World Touring Car Cup.

The Swedish team dropped the bombshell decision on the eve of this weekend’s event in France, with all five Lynk & Co 03 TCRs being withdrawn due to ongoing concerns about tyre safety.

That followed a number of failures at the Nürburgring that resulted in the German races back in May, and then at Vallelunga where the Lynk & Cos withdrew from both races.

Following the announcement that the team was to call a halt to its programme, Discovery Sport Events – the promoter of the WTCR has now responded with a statement of its own in which it expressed surprise by a move that was ‘not expected in light of extensive dialogue between the FIA, Cyan Racing, Geely Group Motorsport, Goodyear and WSC to address concerns following the tyre issues that occurred during WTCR Race of Italy’.

According to the statement, a proposal had been put forward to reduce the levels of compensation weight by 20kg and also to run an additional test at the Anneau du Rhin circuit ahead of the Race of Alsace.

Tyre supplier Goodyear has also offered to replace any tyres carried over from the Italian race weekend.

“Today’s announcement, particularly so close to the home race of Yann Ehrlacher and Yvan Muller, two of FIA World Touring Car racing’s most decorative drivers, is not only surprising but is also very unfortunate and we share the collective sense of frustration of the WTCR Race of Alsace GrandEst promoter and the fans,” the statement concluded.

“Fortunately, the WTCR can count on the participation of a number of other top teams and drivers, which means WTCR Race of Alsace GrandEst will go ahead as planned.

“The focus will then turn to the remaining races of the season, details of which will be announced once an FIA World Motor Sport Council e-vote, due to begin on August 8, has been completed.”

Lotti meanwhile also admitted surprise at the decision, which he said had been taken without any rationale.

“WSC has always respected the competitors’ decisions, but in this case I can’t find any rationales,” he said, “especially after WSC has elaborated, together with the FIA, the series promoter and the tyre supplier, measures that would solve the issues, such as a 20-kilo reduction in the racing weight of all the cars and an increase in the number of new tyres that can be used during the racing weekend.

“And it’s worth to point out that the aforesaid weight break would make the Lynk & Co cars 30kg lighter than they were at the end of the 2021 season.

“On top of this, two free test sessions have been included in this weekend’s schedule, to offer all competitors the opportunity of evaluating the effectiveness of these measures as regards to the track’s characteristics.

“WSC will be represented this weekend at the Anneau du Rhin, to show its full support to the FIA, the promoter, the competitors and the stakeholders.”