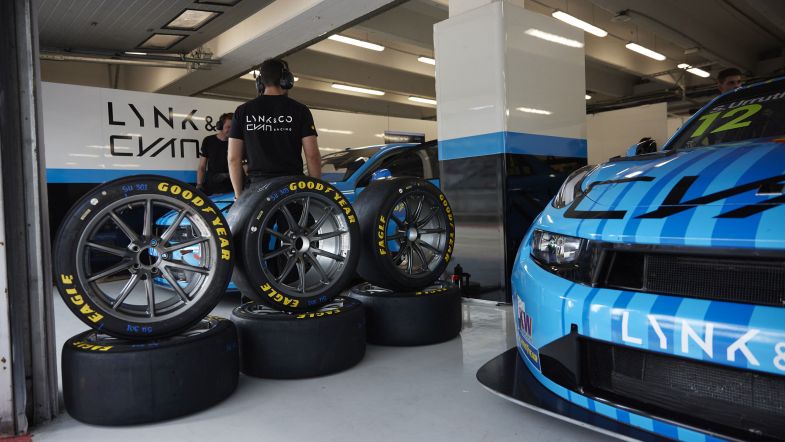 The Lynk & Co Cyan Racing team has announced an immediate suspension of its programme in the FIA World Touring Car Cup due to ongoing concerns about the safety of the Goodyear tyres being used in the series.

After races of the German round at the Nürburgring back in May were cancelled on safety grounds, Lynk & Co – the defending series champions – withdrew from the last meeting at Vallelunga after a number of issues for the 03 TCR, which included a high-speed failure for Yvan Muller.

Whilst the Italian races went ahead without the five Lynk & Co cars, a number of other entrants then suffered failures in the two races.

Cyan Racing had called on WTCR stakeholders to find a resolution to the problem, which it believes has been caused in part by the current Balance of Performance and Compensation Weight rules.

As it stands, the 03 TCR is the heaviest car in the field, running 50kg heavier than any other model on the grid once Compensation Weight is also taken into account and 80kg heavier than the Hyundai of points leader Mikel Azcona.

With ongoing talks having failed to find a solution to the team’s concerns, it has now taken the decision to suspend all activities in the WTCR with immediate effect.

As a result, the team will not compete at Anneau Du Rhin in France this weekend, or in the remaining races that were due to be held in Asia but are now to be rescheduled to new venues.

“We have a tyre this year that cannot handle the Balance of Performance and Compensation Weight window for all cars on all tracks, and our car runs heaviest of all,” Fredrik Wahlén, team manager of Cyan Racing said.

“As a result, our drivers are subjected to tyre failures at high speeds and crashes and it is simply not possible for Cyan Racing to continue the season in a safe manner.

“It is the toughest decision we have ever taken as every single member of Cyan Racing is here to win and have sacrificed a lot of things to get where we are today.

“But we can’t race in a safe way under the current circumstances and safety is our number one priority. We wish to thank the FIA for their support in these tough circumstances.”

The decision, which effectively ends Lynk & Co’s stranglehold on the championship titles, was taken following consultation with Geely Group Motorsport.

“It has been a prolonged and incredibly frustrating situation for the team, the drivers, commercial partners and fans, a situation which have progressively pushed us out of the championship,” Alexander Murdzevski Schedvin, Head of Geely Group Motorsport said.

“We are very thankful for the efforts of the FIA in trying to find a solution. Unfortunately, the combined effort of the WTCR stakeholders could not present a satisfactory solution to enable Cyan Racing to participate in the WTCR in a safe manner.”

Cyan Racing’s exit from the 2022 WTCR season leaves a 12-car grid for this weekend’s races in France.