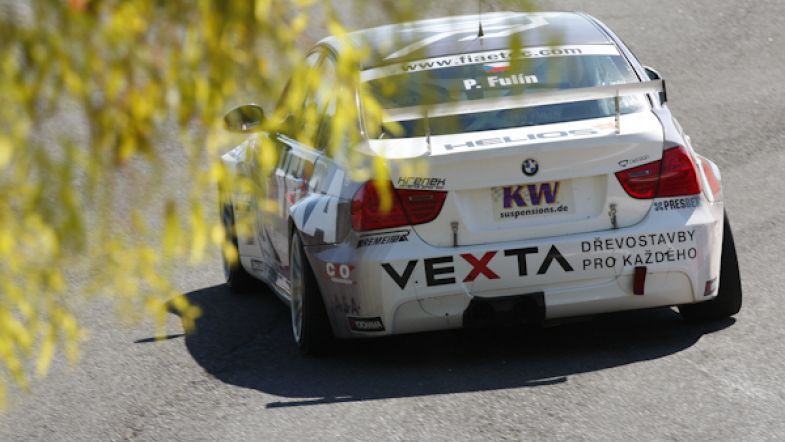 Petr Fulín extends lead with race one win at Pergusa

Krenek Motorsport’s Petr Fulín won the first race of the day at the Pergusa circuit in Italy ahead of a charging Dušan Borković in the NIS Petrol Racing Team Chevrolet, and extends his lead over Mat’o Homola to ten points.

SMP Russian Bears Racing’s Anton Ladygin started from pole position, and though the 23-year-old Russian held the lead into Turn 1, Fulín and Tuenti Racing’s Jordi Oriola was able to pass him into Turn 2, with his SEAT León Supercopa soon dropping down the order with an apparent puncture.

18-year-old Slovakian Mat’o Homola had a great start from eighth on the grid and was up to third before the safety car was called on the first lap when the S1600 car of Ksenya Niks rolled at Turn 7, clipping the kerb hard and landing on the roof of her M-Sport Ford Fiesta. The marshals righted the car and Niks climbed out uninjured but the car is unlikely to be able to compete in race two due to the damage.

When the race restarted on lap three, Homola was quick to charge up to second place, passing Jordi Oriola’s SEAT, whilst Dušan Borković had a poor restart and fell to sixth behind the second Krenek BMW of Michal Matejovsky.

A lap later and Borković regained his composure and began his charge to the front, getting back ahead of Matejovsky and then passing Nikolay Karamyshev’s Black and White Racing SEAT on lap five, Jordi Oriola’s SEAT on lap six and then Mat’o Homola’s BMW on lap seven with a pass down the inside at Turn 14.

Fulín however at this point had built up a four and a half second lead, and Borković was only able to halve that in the remaining four laps.

Jordi Oriola was able to defend against Nikolay Karamyshev to keep fourth and take the win in the Single-Make Trophy class, whilst Ravenol Team GENA’s Kevin Krammes again won in the S1600 class, but this time by default with Ravenol Team SAN’s “Romeo Luciano” retiring from the class lead with just one lap to go, pulling over with an engine problem on the start finish straight.

The top eight is reversed for race two which will see Target Competition’s Mario Dablander start from pole position alongside SMP Russian Bears’ Mikhail Maleev, and race one winner Petr Fulín starting from eighth on the grid for the standing start.