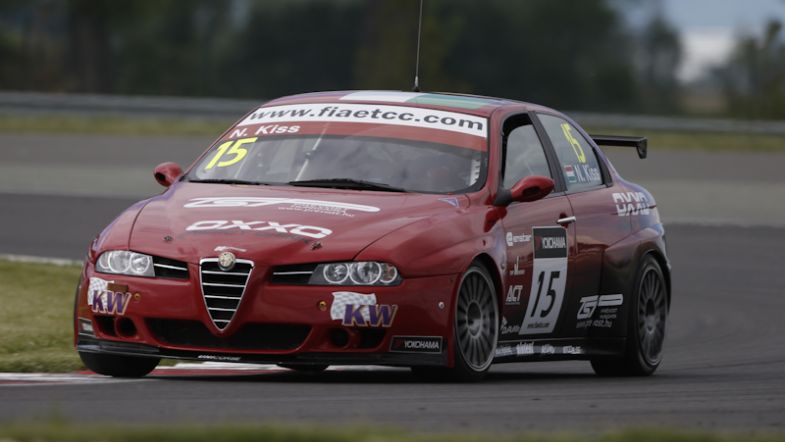 Norbert Kiss put the Alfa Romeo 156 on top in the final practice session ahead of this afternoon’s qualifying session at the Slovakiaring, going faster in his normally aspirated Alfa Romeo than the turbocharged TC2T cars in the 30 minute session, which was briefly red flagged.

The Hungarian set his quickest time in the final ten minutes of the session, driving the Team Unicorse-run 156 S2000, built by N.Technology over ten years ago and is running with a waiver this season as the car is now officially out of homologation.

Kiss was just 75 thousandths of a second faster than Campos Racing’s Nikolay Karamyshev, with the Russian carrying 41kg of success ballast this weekend in his Chevrolet Cruze 1.6T. The Russian was the fastest of the TC2T class runners, with Kiss the fastest in TC2.

The SEAT León Supercopas were slower than usual at the Slovakaring circuit, with Andreas Pfister the fastest in the class, back in 13th position, 3.7 seconds off the pace.

Ulrike Krafft was fastest in the S1600 class in her Ravenol Team Ford Fiesta, 23rd overall in the 28 car field and 17.8 seconds slower than the S2000-spec Alfa Romeo of Kiss.

The session was red flagged with eight minutes to go after Liqui Moly Team Engstler’s Plamen Kralev went off at Turn 1.

Engstler have withdrawn Franz Engstler from the event, who was only running in the test session yesterday, along with Campos’ John Filippi, to gain experience of the track.

Qualifying for the ETCC takes place at 15:15 CET.