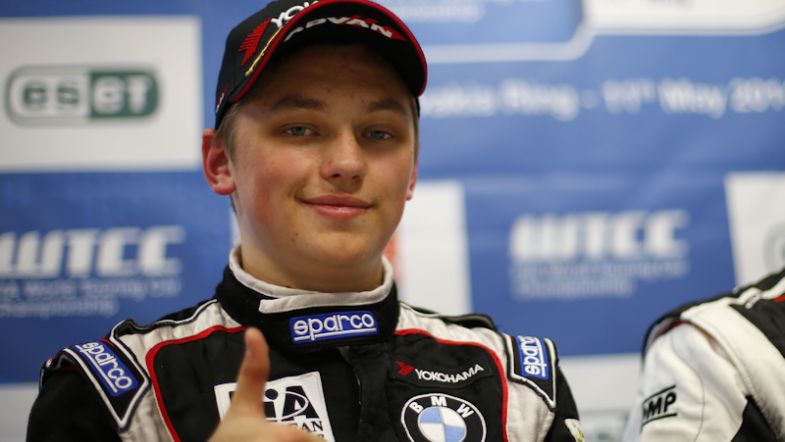 Mat’o Homola does the double at the Slovakiaring

Mat’o Homola has taken another victory at the Slovakiaring, finishing just ahead of his 2013 S2000 championship rival Petr Fulín after fighting his way through to the lead from eighth on the grid.

The Slovakian driver started from eighth on the reversed grid and was up to fourth by the first corner, although he briefly dropped back to fifth behind the Honda Civic of Swiss driver Peter Rikli.

Andreas Pfister had started from pole position, but slowly fell down the order against the faster S2000 cars. Mikhail Grachev took the lead on the opening lap in his BMW 320 TC with Petr Fulín following close behind in his normally aspirated BMW 320si.

The Campos Racing Chevrolet Cruzes of Nikolay Karamyshev and Igor Skuz started in the midfield in 15th and 16th positions after dramas in race one, and initally made good progess. Karamyshev was up to fourth by the second lap and Skuz up to seventh, but from then on their progress stalled, with Karamyshev ending up in a long battle with the Alfa Romeo 156 of Norbert Kiss, with the two swapping positions several times, allowing the top three BMWs to break away.

Homola closed down on Petr Fulín and took second position on lap four, and then passed Mikhail Grachev for the lead on the start of lap five into Turn 1, but the Russian was able to grab the spot back on the inside into Turn 2. Homola replicated the move one lap later, but this time closing the door into Turn 2, taking the lead and holding on to take the win.

Grachev lost second position to Fulín on the penultimate lap, and the Czech driver closed right on the tail of Homola’s BMW giving the Slovakian a brief scare, but he went on to take his fourth ETCC victory and score a perfect 23 points from the weekend, with Fulín winning the TC2 class for normally aspirated S2000 cars.

Nikolay Karamsyshev made a mistake on the penultimate lap in his Campos Chevrolet at the final corner, falling down to eighth position and fourth in the TC2T class.

As a result, Skuz closes back up on Karamyshev, who stills leads the TC2T standings on 33 points with Skuz on 31, with Homola now third on 23 after coming to the weekend with no points at all.

Andreas Pfister took the win again in the Single-Make Trophy class, finishing 11th overall and just half a second ahead of Dmitry Bragin, while Ulrike Krafft took her fourth consecutive victory in S1600, finishing one second ahead of Gilles Bruckner in 19th overall.

The next round of the ETCC is at the Salzburgring on May 25th.