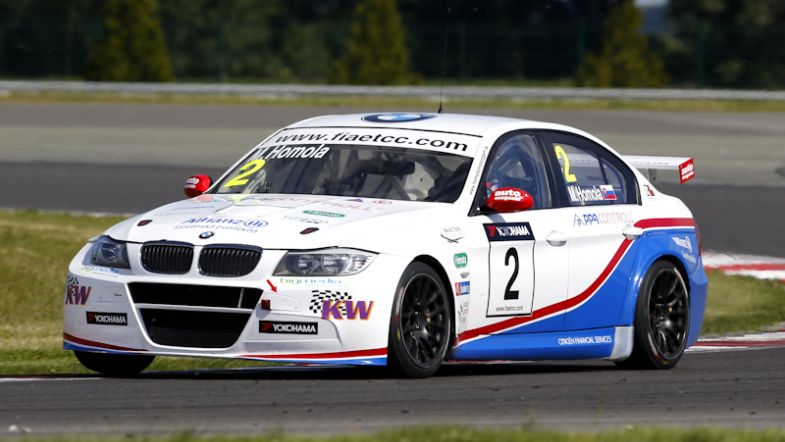 Mat’o Homola took his third victory in the FIA European Touring Car Cup, and his second at his home circuit of the Slovakiaring, while the TCT2 championship fighting team-mates of Nikolay Karamyshev and Igor Skuz came together on lap five while in the lead.

With the circuit drying, it was all about whether to fit wets or slicks ahead of the race. Karamyshev chose wets, while Homola made a late call on the grid for slicks along with the majority of the field.

At the start, the Russian drove around the outside of Homola’s BMW to take the lead in the Campos Racing Chevrolet Cruze 1.6T, with a slick-shod Alfa Romeo 156 of Norbert Kiss moving ahead of Igor Skuz’s Chevrolet for third.

Skuz was able to go around the outside of both Kiss and Homola for second at the start of lap two, which soon saw the safety car deployed after Ksenya Niks crashed into the barriers, causing heavy damage to both her Ravenol Team Ford Fiesta and the tyre barrier.

When the race restarted on lap five, Skuz was now attacking team-mate and rival Karamyshev for the lead, lining up a pass down the inside into Turn 2 and heading side-by-side into Turn 3, where the two made contact and slid off into the gravel, both rejoining further down the order.

This left Homola in the lead and unchallenged, holding a short gap to Norbert Kiss’s Alfa Romeo, which was in the lead of the TC2 class for normally aspirated S2000 cars.

From the back of the grid, Proteam Racing’s Mikhail Grachev charged forward, moving all the way to sixth from 28th and taking second in the TC2T class results in the BMW 320 TC.

Andreas Pfister was running in seventh at the start of the final lap and leading the Single-Make Trophy class, but dropped one spot behind Norbert Nagy’s MGS Racing Chevrolet at the finish and will start race two from pole position.

Ulrike Krafft had to fight harder than she had in France for her win in the Super 1600 class, crossing the finish line just 0.276 ahead of Gilles Bruckner’s Ford Fiesta ST.

Nikolay Karamsyshev carried on to finish in 16th overall but third in the TC2T class, with Igor Skuz right behind him at the finish, though the Russian made contact with the SEAT León of Vladimir Nikolaev on the final lap, spinning the SEAT off the circuit and is likely to be investigated by the stewards.