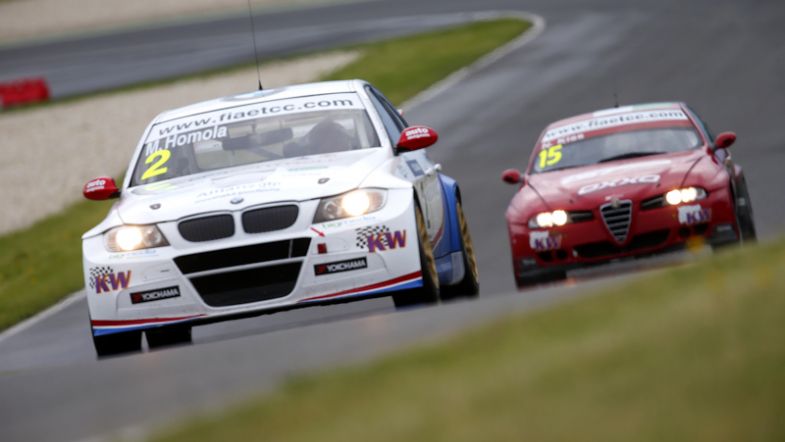 Slovakia’s Mat’o Homola had a strong weekend at his home round at the Slovakiaring, with the races falling perfectly within the only dry spell on Sunday, but a late call to slicks saw him lose his win in race one, and his post-race celebrations for race two earn him a 1,000 EUR fine.

The 19-year-old had secured pole position in his BMW 320 TC on a sunny and dry Saturday, ahead of the much favourted Chevrolet Cruzes of Nikolay Karamyshev and Igor Skuz. The two Chevrolets had moved ahead of him in race one, but then collided on lap five, and with the wrong tyre choice of wets, were unable to progress back through the order.

Homola had made the right tyre choice with slicks, but apparently too late, with Homola’s tyres deemed to have been changed after the five minute board, and countryman Samuel Sladecka changing his tyres after the three minute board, earning them 30 second and 40 second penalties as a result.

“There’s a rule that at five minutes before the start of the race all wheels needed to be fitted to the car and no work on the tyres,” said Homola to TouringCarTimes. “My team manager told me and told the stewards also that we are 100% sure no one was working on the car, but it’s the decision of the judges of the fact, and we can’t do anything (about it).

“I also got a fine of 1,000 EUR for doing doughnuts. At the moment when I won, when I’d won the two races in a row and after pole in qualifying, I had to do something for the fan, I did two doughnuts outside of the track at the run-off at Turn 3, they were really fun, but also the rules say that’s not allowed.”

Homola still keeps his victory for race two from the reversed grid, and with the 30 second penalty only dropping him to second in the TC2T class in race one, he still picks up 21 points from the weekend and puts his championship back on track.

“The second race was really hard. It was a really tough race, maybe the toughest race in my career, as to pass Mikhail Grachev in the BMW turbo was really hard, but I knew that I was faster, but I had destroyed my tyres getting past him and then had to defend against Petr Fulín, but I’m really happy with the win.”