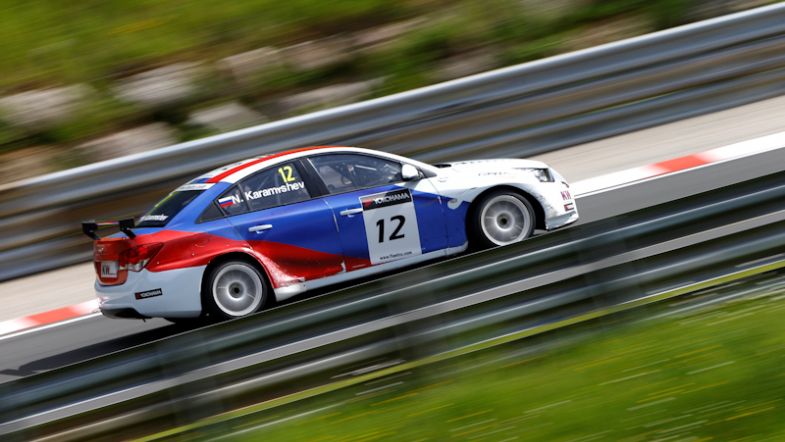 Nikolay Karamsyshev led another Chevrolet 1-2 for Campos Racing in the second 45 minute test session at the Salzburgring. The Russian driver, who leads the TC2T points classification, was almost half a second quicker than team-mate Igor Skuz, while Mat’o Homola was the closest threat in his BMW 320 TC in third.

Karamyshev’s time was a 1:27.583, two seconds off the pole time set in the same car last season by Yvan Muller, but was comfortably clear of his team-mate, despite carrying 44kg of success ballast this weekend.

Skuz, who is carrying 37kg, was in the low 1:28s, while Homola, now carrying 41kg after his success at his home race two weeks’ ago, was almost a second behind Karamyshev’s Chevrolet Cruze 1.6T.

The fastest driver in the TC2 class for normally aspirated cars was the Czech driver Michal Matejovsky. Matejovsky was 2.5 seconds off the pace overall and just less than a tenth of a second ahead of his Krenek Motorsport team-mate Petr Fulín.

In the Single-Make Trophy class for SEAT León Supercopas, Dmitry Bragin was fastest in 12th overall in his SMP Russian Bears entered car. Bragin was just 0.031 seconds ahead of German driver Andreas Pfister, with Finnish driver Aku Pellinen third in the class and 14th overall.

Although six cars are entered in the S1600 class this weekend, only two chose to take part in the test. The fastest was the Swiss driver Patrick Wolf in his Ravenol Team-run Ford Fiesta, 21st overall and 15 seconds slower than the leading Chevrolet, with the Ukrainian Kseniya Niks 22nd, 1.1 seconds behind in her repaired Ford Fiesta.

The next session for the ETCC teams is their Saturday free practice session, which takes place at 11:45 CET tomorrow.