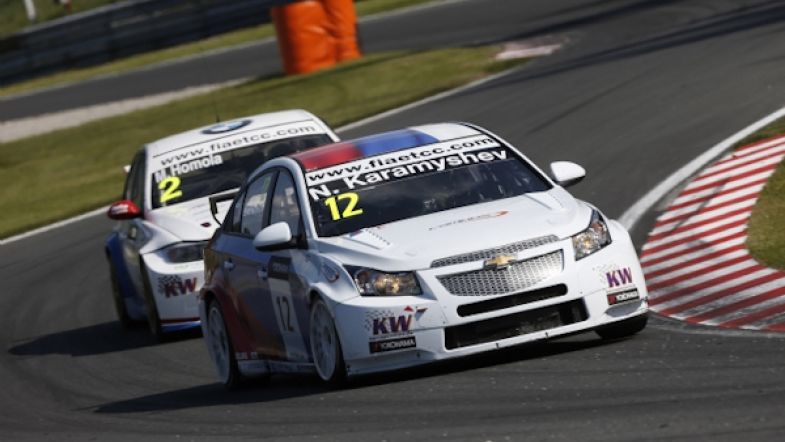 Campos Racing’s Nikolay Karamyshev made it an almost perfect weekend at the Salzburgring, winning both races on Sunday despite starting from last for the first race after being excluded from qualifying on Saturday.

Karamyshev started eighth for the reversed grid second race but was up to third by the end of the first lap, closing on the two leading BMW 320sis of Milovan Vesnic and Christian Fischer.

Vesnic was having his best race of the year to-date, but along with Engstler’s Plamen Kralev, was judged to have jumped the start and was forced to serve a drive-through penalty, which he took at the same point as Karamyshev passing Fischer for the lead.

Slovakian driver Mat’o Homola also moved up into second on the same lap and harried Karamyshev throughout the rest of the race, but went on to cross the line 1.1 seconds behind.

Fischer maintained his pace throughout the race however and went on to take his first win in the TC2 class for normally aspirated cars, finishing ahead of Petr Fulín, who’d recovered from a mistake made at the beginning of the race.

In the Super 1600 class, Gilles Bruckner won for the second time today in his Team LuxMotor Ford Fiesta, ahead of Ravenol Team’s Ulrike Krafft who had been eliminated from the first race when she was lapped by Igor Skuz. She was almost taken out again by Mikhail Maleev at the final corner of the final lap, as the SEAT driver almost collected the Ford Fiesta as he came around the corner, going wide and spinning across the start finish straight.

The Single-Make Trophy class was won by Aku Pellinen, who had to fight to hold off Andreas Pfister’s SEAT, crossing the line just two-tenths of a second ahead.

Igor Skuz, who’d collided with Krafft’s Ford while in the lead of the first race, started from the pits for race two, and was able to get to seventh place before the end of the race, but fourth and last in the TC2T class.

Nikolay Karamyshev leads the TC2T standings on 57 points, as the ETCC heads to the next round at Spa-Francorchamps at the end of June.

Petr Fulín has a 22 point lead over his team-mate Michal Matejovsky in the TC2 class, while Aku Pellinen leads Andreas Pfister by 11 points in the Single-Make Trophy category.

UUlrike Krafft’s DNF in race one closes things up in the S1600 class. She still leads with 57 points, but is now just 17 ahead of Gilles Bruckner.