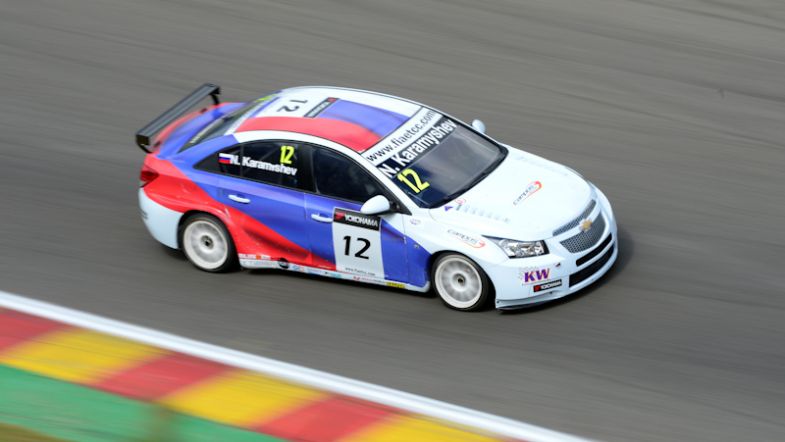 European Touring Car Cup TCT2 points leader Nikolay Karamyshev was again on top in the second 45 minute test session at the Spa-Francorchamps circuit, two-tenths of a second ahead of his Ukrainian team-mate Igor Skuz.

Karamyshev set the first target time in the session, before Skuz took over at the top with just over 20 minutes to go in the #3 Chevrolet Cruze.

A few minutes later however, Karamyshev was back on top, setting a time of 2:35.111 to go fastest, and his time was unbeaten for the remainder of the session.

A number of cars decided not to take part in the session, mostly from the Super 1600 class in which just Ulrike Krafft, Kseniya Niks and newcomer Ben Lintgen were the only three drivers of the six cars entered which took to the track, with Krafft typically the fastest, 18th overall in her Ravenol Team Ford Fiesta.

Mat’o Homola was third fastest overall and in the TC2T class, while Michal Matejovsky was the fastest in the TC2 class for normally aspirated cars in the Krenek Motorsport BMW 320si, just ahead of his Czech compatriot and team-mate Petr Fulín.

Finnish driver Aku Pellinen elected to sit out the session in his SEAT León Supercopa, after setting the fastest time in the first test for the Single-Make Trophy class, and so it was Andreas Pfister who led the way in the class in the second test, tenth fastest overall and just under six seconds down on the pace setting TC2T class Chevrolet Cruzes.

Technical problems for both Peter Rikli, of the Rikli Motorsport Honda team, and Selcuk Salargil, making his debut this weekend for the Borosun Otomoviv team, meant neither of the TC2 class drivers took part in the test session.

The next session for the ETCC is the 30 minute free practice session, which takes place at 9:45 CET tomorrow.