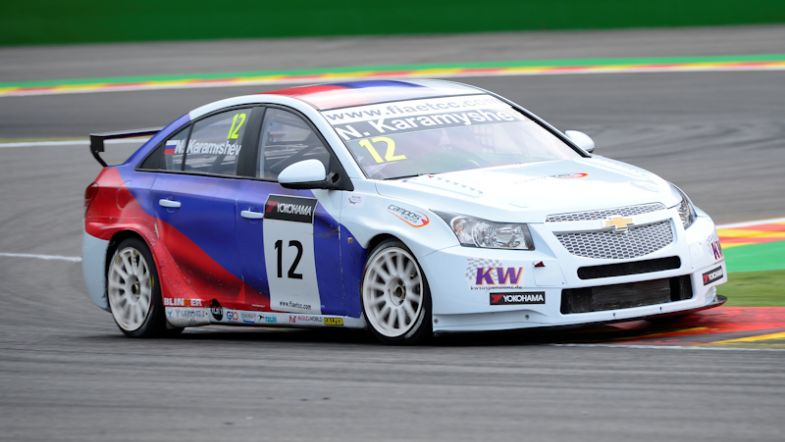 Nikolay Karamyshev has moved one step closer to claiming the TC2T class drivers’ title this weekend with pole position for the Spa-Francorchamps round of the FIA European Touring Car Cup.

The Russian had initially made a mistake on his first lap, and with team-mate Igor Skuz aborting his run after receiving a warning for short-cutting the course out of Eau Rouge, it was Mat’o Homola who said the first target in the Homola Motorsport BMW 320 TC, with a time of 2:35.795.

Homola only held the top spot for as long as it took the Russian driver Karamyshev to set his second lap though, with the Campos Chevrolet driver jumping to the top of the time sheets with a time of 2:35.382.

Skuz was on a faster second run, but again aborted his lap after receiving a warning for exceeding the track limits at Eau Rouge, and also since the yellow flags were out at Turn 14 after the SMP Russian Bears SEAT León Supercopa of Mikhail Maleev stopped, where it remained for the rest of the session.

Samuel Sladecka sat at the top of the table for the TC2 class for normally aspirated cars in his Alfa Romeo 156 for most of the session, until reigning S2000 drivers’ champion Petr Fulín took over in his Krenek-run BMW 320si with ten minutes to go.

Campos’s Nikolay Karamyshev then set a target time almost out of reach in the final few minutes with a time of 2:234.152, 1.6 seconds faster than Homola. Homola went out and improved his time as well, closing to at least within six-tenths of the Chevrolet driver, but ultimately had to settle for second place.

Skuz left it to the absolute final moment to set his time, with the Ukrainian then popping up to third overall and in the TC2T class with his only timed run.

In the Single-Make Trophy, Dmitry Bragin took the class pole in his SMP Russian Bears Racing SEAT León Supercopa, just ten-tenths of a second ahead of Andreas Pfister, who was in turn just over a tenth ahead of Sergey Ryabov.

In the Super 1600 class, Ulrike Krafft claimed pole position in the Ravenol Team Ford Fiesta, effectively dominating the class with a time 1.8 seconds faster than her closest rival, the Luxembourg driver Gilles Bruckner.

The first of two races for the ETCC takes place at 16:05 CET on Sunday.