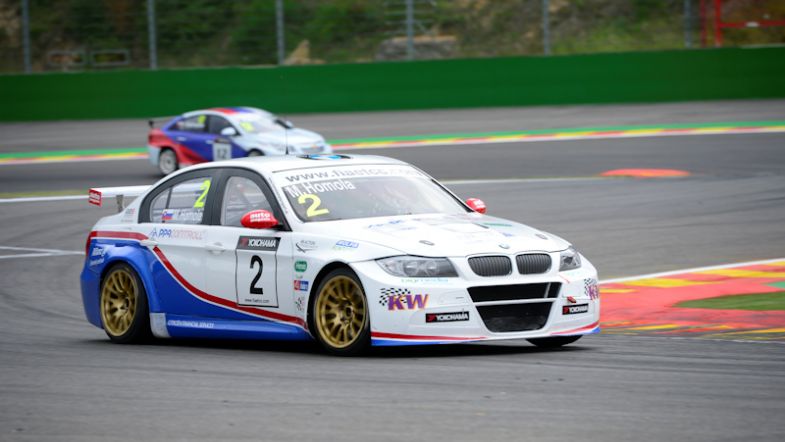 Campos Racing’s Nikolay Karamyshev continued his dominant run in the warm-up session for the Spa-Francorchamps race weekend of the FIA European Touring Car Cup, but was less than a tenth of a second ahead of the BMW 320 TC of Slovakian driver Mat’o Homola.

The Russian driver, who could clinch the TC2T class drivers’ title today if he outscores his Campos team-mate Igor Skuz by ten points, was able to set five laps in the 15 minute warm-up, with his best time a 2:36.586, just 0.048 seconds ahead of Homola’s BMW.

Petr Fulín was third in the normally aspirated BMW 320si of Krenek Motorsport, 1.2 seconds behind, but the fastest of the TC2 class cars by some margin, with team-mate Michal Matejovsky fifth overall, 1.3 seconds further behind.

Igor Skuz, who needs a good weekend to keep his title hopes alive, was fourth quickest, 1.4 seconds slower than Karamyshev in the identical Chevrolet Cruze 1.6T.

Dmitry Bragin was fastest of the Single-Make Trophy cars, setting the tenth fastest time in his SEAT León Supercopa, with team-mate Sergey Ryabov his closest rival in 13th.

Ulrike Krafft was fastest of the Super 1600 class cars, with just four of the six cars entered taking part in the session, finishing 23rd overall and a second clear of Gilles Bruckner.