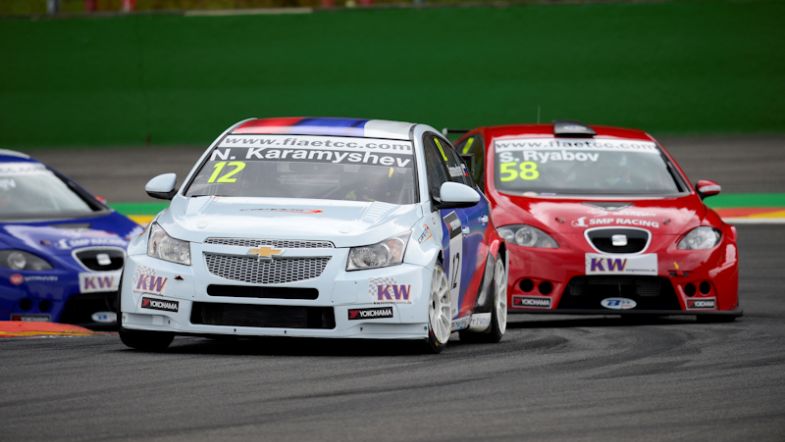 Nikolay Karamyshev dominates race one at Spa, title in sight

Campos Racing’s Nikolay Karamyshev led from lights to flag in the first race at Spa-Francorchamps, with his points lead over closest rival, now the BMW of Mat’o Homola, 18 points before the second race.

The Chevrolet driver had a good getaway at the rolling start, while his team-mate Igor Skuz was able to get down the inside of Homola’s BMW at La Source and grab second, which then put Homola on the offensive for five laps, eventually capitalising when Skuz made a mistake at the Bus Stop chicane and took back second, but could do nothing about Karamyshev’s lead.

Elsewhere on the first lap, the race, and even the lap, was a complete disaster for the Borusan Otomoviv Motorsport team, fielding three cars for the first time this weekend.

Kaan Onder tried to pass team-mate Aytac Biter down the outside heading out of La Source and towards Eau Rouge, with Biter seemingly closing the door on him. Onder was still able to get ahead, but the resulting suspension damage from the contact forced him to retire, while Biter spun and fell to the back of the pack, recovering to finish 25th, one lap down.

New driver Selçuk Salargil was also caught up in an incident with the SEAT León Supercopa of Aku Pellinen later on the lap, and was also out of the race.

In TC2, Petr Fulín took a comfortable victory finishing fourth overall in his Krenek Motorsport BMW 320si. The closest to him was Samuel Sladecka in the Sladecka Motorsport Alfa Romeo 156, over six seconds behind, with brother Filip completing the class podium in the Alfa Romeo run by the Hungarian Team Unicorse squad.

In the Super 1600 class, Ulrike Krafft led from the start, but stopped with a technical problem on lap five, handing the win to Gilles Bruckner, who now closes the points gap to just seven points.

In the Single-Make Trophy, Dmitry Bragin was unchallenged for the class lead, but his two Russian team-mates Mikhail Maleev and Sergey Ryabov battled hard for second in the class, with Ryabov coming up on top despite almost coming together at the Bus Stop chicane with one lap to go.

Karamyshev crossed the finish line to take the win amidst a battle he was lapping in S1600, with Ukraine’s Kseniya Niks and Germany’s Christian Kranenberg dicing for fourth in the class.

The next race follows imminently with the top eight reversed, handing pole to Dmitry Bragin ahead of Michal Matejovsky’s Krenen BMW.