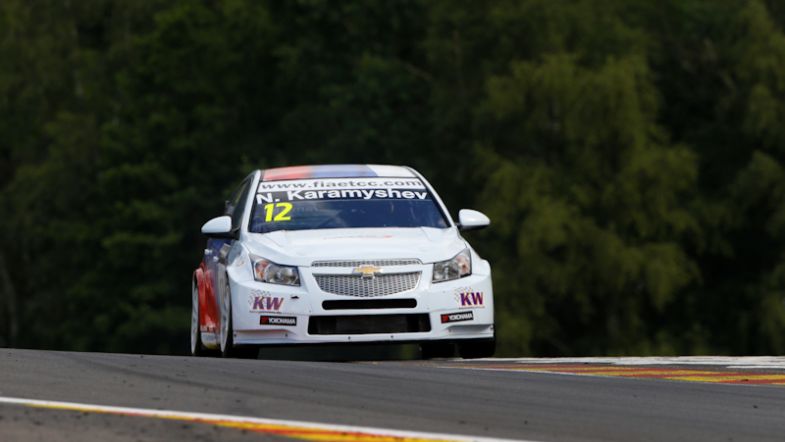 Nikolay Karamyshev won the second race at Spa-Francorchamps, passing the BMW of Mat’o Homola on the final lap as the Slovakian spun out of the lead at Les Combes, while Petr Fulín moved up to second and is close to claiming the TC2 title for normally aspirated cars.

At the start, the Campos Racing Chevrolet of Igor Skuz was spun out at La Source, while Dmitry Bragin led the way in the SMP Russian Bears Racing SEAT León Supercopa.

The SEAT was soon passed by Michal Matejovsky in the TC2 class BMW 320si of Krenek Motorsport, but even by the end of the lap Mat’o Homola had moved up to the lead in his BMW 320 TC.

By the end of the second lap Karamyshev had moved up into third place, passing the two Alfa Romeo 156s of the Sladecka brothers.

When Karamyshev passed Petr Fulín for second, Samuel Sladecka briefly moved up into third as well to lead the TC2 class, until suspension failure forced him to stop the car, handing the class lead straight back to Fulín.

Further down the order in the TC2 class, Liqui Moly Team Engstler’s Christian Fischer had worked his way forward from the back of the grid, and had passed Andrina Gugger’s Rikli Motorsport Honda on lap three, and then team boss Peter Rikli on lap six, before he spun at the bus stop where he was hit by Gugger in the front left as she went past him.

On the final lap, Fischer dived up the inside at the same corner and crashed into Gugger’s car, she was able to cross the line in seventh with Fischer eighth, although with broken suspension, but the Swiss driver is under investigation by the race officials. They were followed in short order across the line by Rikli and Borosan Otomotiv’s Aytac Biter

Karamyshev was closing fast on Homola, but didn’t have to find a way past as the Slovakian made an error coming out of Les Combes on the final lap and lost two positions, allowing Karamyshev to take the win and Petr Fulín up to second.

Dmitry Bragin finished sixth after starting first on the road, but took an easy class victory in the Single-Make Trophy for SEAT León Supercopa cars.

In the S1600 class, Gilles Brucker took another victory after Ravenol Team’s Ulrike Krafft was unable to take the start after an engine problem in race one. After leading the series all year long, the German drops three points behind Bruckner heading to the final round at Pergusa in September.

Nikolay Karamyshev now leads the TC2T class standings by 20 points ahead of Mat’o Homola, with double points available at the final in September.