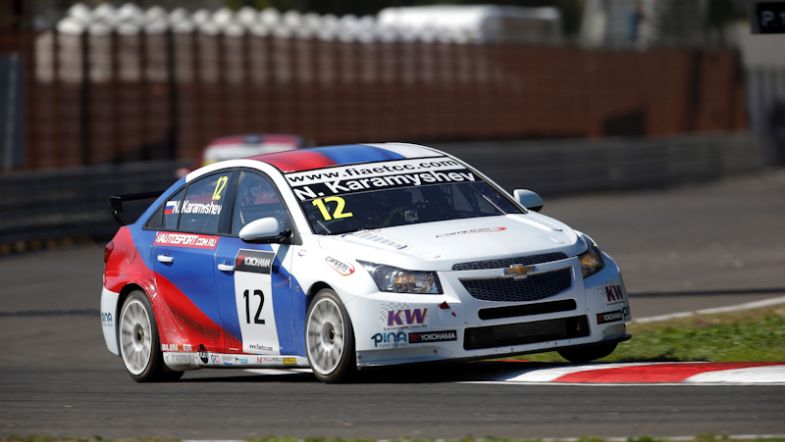 Campos Racing’s Nikolay Karamyshev topped the time sheets in the final practice session at Pergusa, in a session which was halted three times with lengthy red flag periods.

The Russian was half a second faster than his nearest competitor, team-mate Igor Skuz in an identical Chevrolet Cruze 1.6T.

The BMW 320si of Krenek Motorsport driver Petr Fulín was the fastest of the normally aspirated TC2 class competitors, and third quickest overall.

The first red flag flew when Vladimir Nikolaev crashed out at the Prosperpina chicane. After a long delay, the session had restarted for less than two minutes when Liqui Moly Team Engstler’s Christian Fischer hit the wall after the Schumacher chicane.

The third and final red flag was brought about after Sergey Ryabov stopped his SMP Russian Bears Racing SEAT León at Turn 7 with just under eight minutes to go.

Norbert Nagy was the fastest of the Single-Make Trophy drivers, with the Hungarian sixth fastest in his SEAT León Supercopa. The next fastest of the SMT drivers was Andreas Pfister, ninth overall, with Dmitry Bragin 12th in the SMP Russian Bears Racing entry.

Ulrike Krafft was fastest in the Super 1600 class, just three-tenths of a second ahead of Ravenol Team team-mate Christian Kranenberg, 19th overall and 18.2 seconds off the pace of the leading TC2T class car of Karamyshev.

Qualifying is due to get underway at 17:00 CET, assuming the day’s events get back on schedule, with the three red flags making the session run over 30 minutes past its schedule finish time.