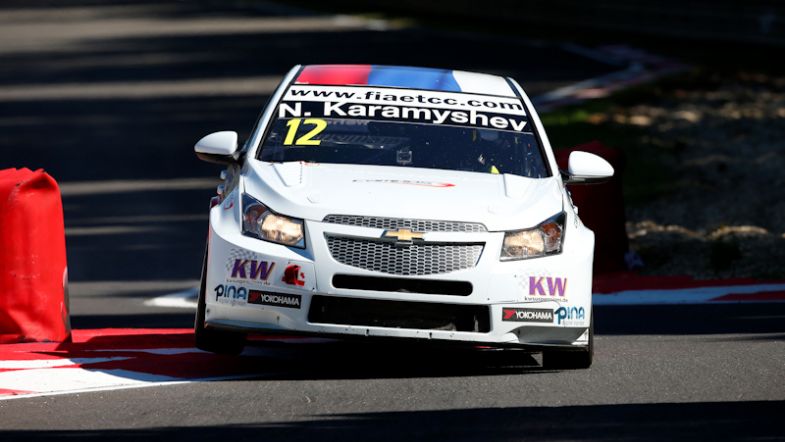 Campos Racing’s Nikolay Karamyshev has taken pole position for the final round of the 2014 FIA European Touring Car Cup in Pergusa, but the Russian is under investigation for contact with his title rival and team-mate Igor Skuz, after the two came together on the outlap in the 30 minute session, which eliminated Skuz from qualifying.

The session had started 45 minutes late at 17:45 CET due to earlier sessions overrunning, including the ETCC’s free practice session which with three red flags caused a long delay in the day’s schedule.

Skuz and Karamyshev were seemingly working together in order to make use of the slipstream, with Karamyshev ahead of Skuz. The two however came together at the Schumacher chicane, which saw Skuz hit the barrier, and was also collected by the SEAT León Supercopa of Andreas Pfister. The qualifying session was halted for nearly 45 minutes as the barriers were repaired, only resuming again at 18:30 CET.

When the session did resume, Karamyshev was quick to set the benchmark in his hastily repaired Chevrolet Cruze 1.6T with a time of 1:49.203, but later in the session the Slovakian driver Mat’o Homola jumped ahead with a time of 1:49.127, forcing Karamyshev to pull out another flyer right at the end of the session. The Russian got back ahead with just under a minute to go, setting the best first and final sectors in his Chevrolet to steal back pole by just over a tenth of a second.

Homola will therefore start from second position for the first race in his rear-wheel drive BMW 320 TC for the rolling start, while Petr Fulín was third fastest in the Krenek Motorsport BMW 320si, one spot ahead of his team-mate and closest rival for the TC2 class crown Michal Matejovsky. However, Matejovsky would have to win both of tomorrow’s races with Fulín effectively not scoring in order to overhaul the points gap.

Norbert Nagy took pole position in the Single-Make Trophy class on his return to the category, after starting the year in TC2 with a Chevrolet Cruze LT. Nagy was just two-tenths of a second faster than Dmitry Bragin, who is fighting for the SEAT León Supercopa class title along with Andreas Pfister and Sergey Ryabov this weekend.

In the S1600 class, Ulrike Krafft took an important pole position in her Ravenol Team Ford Fiesta, and with the six points she earns from the class pole with title rival Gilles Bruckner picking up four in his Team LuxMotor Ford for second, the two drivers will start the first race tomorrow tied on points as well as victory counts in this year’s ETCC.

With both Igor Skuz and the SEAT of Andreas Pfister failing to set a time, the two drivers will start 22nd and 23rd for the first race of the day, which is scheduled to get underway at 12:15 CET tomorrow. The result of race one will set the grid for race two, with the top eight finishing positions from the first race reversed.