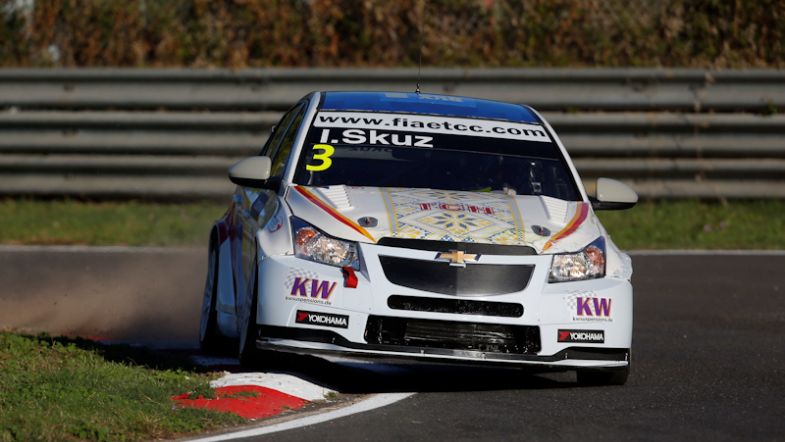 Igor Skuz won the last round of the 2014 FIA European Touring Car Cup at Pergusa, while second in the Single-Make Trophy class was enough to give Russian driver Dmitry Bragin the class title, while Gilles Bruckner completed a pair of victories to lift the S1600 class crown.

Norbert Nagy started from pole position in the MGS Racing SEAT León Supercopa thanks to the reversed top eight grid, but was vulnerable to Kaan Önder’s rear-wheel drive BMW 320si on the front row for the standing start. As it was, Önder made a poor getaway in his BMW and Nagy led comfortably ahead of Peter Rikli’s Honda Civic and Michal Matejovsky’s BMW 320si into the first corner.

Matejovsky overtook Rikli later on the first lap and quickly closed on Nagy’s SEAT, but was unable to find away past in the opening laps.

Matejovsky then passed Nagy, with team-mate Petr Fulín also passing Nagy during the final few laps, and then closed down and passed his Krenek Motorsport team-mate to take third overall and another victory in the TC2 class for normally aspirated cars.

Nagy finished fifth and won a second consecutive race in the Single-Make Trophy class, while Dmitry Bragin finished sixth overall and second in the class. The Russian had been pursued by his only title rival Andreas Pfister during the early stages of the race, but Pfister stopped with two laps to go, effectively handing Bragin the title before the chequered flag.

In S1600, Bruckner led all the way in his Team LuxMotor Ford Fiesta, having to fight off Christian Kranenberg’s Ravenol Team Ford Fiesta. Ulrike Krafft, now confirmed as the Ladies’ Trophy champion, was unable to challenge the two drivers ahead and finished third, with Bruckner therefore confirmed as the S1600 class champion.

The Pergusa round was the final round and a standalone event for the 2014 FIA European Touring Car Cup, which supported four rounds of the FIA World Touring Car Championship earlier at Paul Ricard, the Slovakiaing, the Salzburgring and Spa-Francorchamps. The 2015 calendar is yet to be revealed by the World Motor Sport Council.