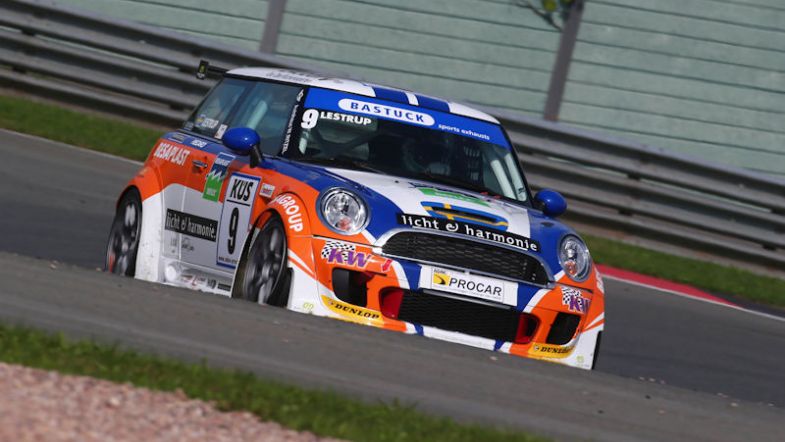 Sweden’s Fredik Lestrup has wound up the 2015 ADAC Procar Series drivers’ title with four races to go after taking his ninth win of the season at the Sachsenring.

The Besaplast Racing driver led from start to finish, winning by eight seconds in his MINI John Cooper Works ahead of Johannes Leidinger’s Ford Fiesta ST.

“At the start it was a bit cramped because Leidinger was very good got away,” said Lestrup. “But I was able to stay in front and then relatively quiet contest the race.”

Lestrup’s win means he now has 121 points, 15 points clear of outgoing champion Heiko Hammel and his Wolf Racing Ford Fiesta, who is now facing a rear-guard action against fellow Ford driver Leidinger, who is just four points behind.

“We have been fighting with blunt weapons, and could not retrieve the best performance from our Fiesta,” said a dejected Hammel. “More than collecting points was not possible this weekend.”

The Division 2 championship is the only class yet to crown a champion. Ralf Glatzel took his sixth win of the season in his Ford Fiesta 1.6 16v. Glatzel fought against his championship rival Andreas Rinke in the ETH Tuning Citroën Saxo throughout the race, but secured victory after Rinke’s Citroën developed an engine problem on the final lap and fell to third.

Glatzel now leads by 13 points with 40 available from the last two meetings at Zandvoort and Spa-Francorchamps.

The Division 3 battle was wrapped up by Steve Kirsch, who up that point had won every race of the season. Kirsch continued that form today, finishing four seconds ahead of his closest competitor Dirk Lauth and now has a 66 point lead over Bernhard Wagner.

The next round of the series takes place at the Zandvoort circuit in The Netherlands on September 19th-20th.