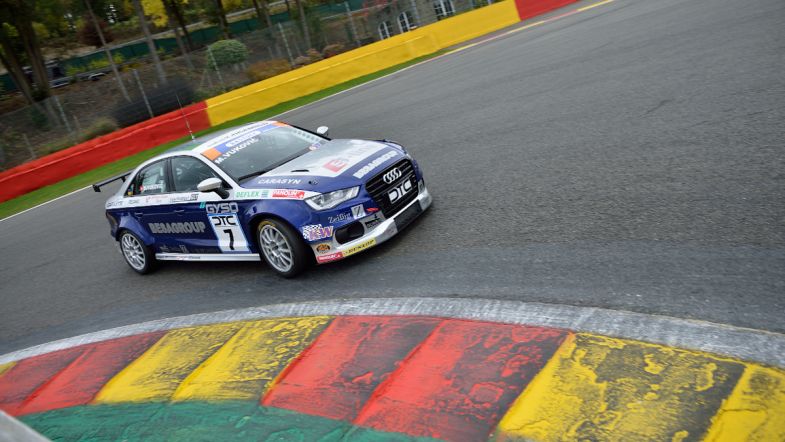 Milenko Vukovic won the first race of the weekend for the DTC series finale at the Spa-Francorchamps circuit ahead of title rival Heiko Hammel, and the two drivers head into tomorrow’s final race tied at the top of the points table.

The Swiss driver led his rival by just a second across the finish line at the legendary Belgian circuit in his Besaplast Vukovic-run Audi A3, with Wolf Racing Ford Fiesta driver Hammel, chasing his second title, now tied for the lead on 123 points.

The two drivers are the only ones in contention for the Super Production class title, with Franjo Kovac over 50 points adrift in the other Besaplast Audi.

Pavel Lefterov won the Production 2.0 class race for Volkswagen Scirocco Cup class cars, although the win was already guaranteed as he was the only driver entered this weekend, effectively winning the title before the weekend started going in with a 19-point lead over Heiko Fulsche.

Ralf Glatzel took his third win of the year in the Production 1.0 class in his Ford Fiesta ST, and his third in a row after two victories last time out at Zolder. The German cuts the gap to Victoria Froß in the fight for second in the drivers’ standings to seven points , with Dirk Lauth already confirmed as the class champion. Froß finished second in race and just needs to finish closer to Glatzel on Sunday to take her best result in the championship.

The final race of the season gets underway at 13:10 CET on Sunday.