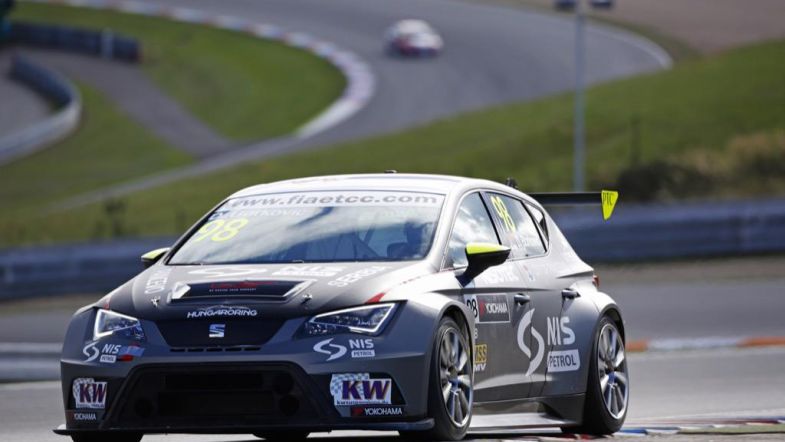 Dusan Borkovic won a hardly-fought race, ahead of Race 1 winner Mat’o Homola, with Davit Kajaia taking another outright podium as well as winning in the TC2T class.

At the start home hero Petr Fulin was immediately out due to a contact, with Michal Matejovsky retaining the lead ahead of TC2T Liqui Moly Team Engstler driver Davit Kajaia. Dejan Bulatovic was in third ahead of Ronny Jost, Dusan Borkovic and Mat’o Homola.

Action started very soon as Borkovic and Homola got rid of Jost and Bulatovic in two laps, with the latter receiving a drive through penalty, whereas further behind Andreas Pfister overtook Lalusic for sixth.

Matejovsky dropped down to fifth, leaving nobody between new leader Kajaia and the charging Borkovic and Homola. The BMW driver surrendered on Lap 6, leaving the Single Make Trophy drivers to fight for the outright win.

After that all the action was focused on the fight for the win, with Homola putting pressure on Borkovic, trying to make it a double, and the Serbian defending hard. Despite all the best efforts from Homola, Borkovic was successful in defending the lead and took the flag ahead of the Race 1 winner, with Davit Kajaia conquering another impressive outright podium as well as the win in the TC2T class.

Ronny Jost came fourth outright and third in the SMT class, ahead of TC2 winner Michal Matejovsky’s BMW 320si. Andreas Pfister finished sixth outright ahead of Mladen Lalusic and a charging Dejan Bulatovic, with Ibrahim Okyay ninth outright and second in the TC2 class ahead of Peter Rikli, who overtook Aytac Biter during the final lap.

In the S1600 class Niklas Mackschin won comfortably ahead of Gilles Bruckner and Florian Hildner.

Next up for the FIA European Touring Car Cup is Zolder in two weeks.