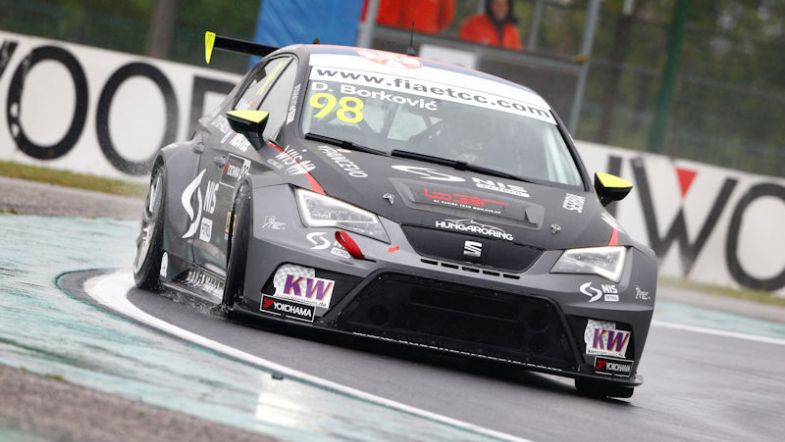 Dusan Borkovic on top in damp final practice in Zolder

B3 Racing driver Dusan Borkovic led the final 30-minute practice session ahead of Saturday’s qualifying session at a wet Zolder, leaving it to the final seconds to deprive Liqui Moly Team Engstler’s Davit Kajaia from enjoying the glory of P1 overall in the session.

The session started off with a wet track which was gradually driving throughout the session which saw the top position change hands between six drivers.

The first benchmark was set by Slovakian driver Mat’o Homola in the SEAT León Cup Racer, who swapped the position twice with the TC2 class driver Peter Rikli, with the Swiss driver in his Honda Civic FD S2000.

Georgian drive Davit Kajaia moved to the top of the time sheets at the ten minute mark and became the first to go under the 1:50 barrier in his BMW 320 TC, before German driver Andreas Pfister took up the reins in the rain to go fastest in his Single-Make Trophy SEAT León.

Kajaia however was on top of the scoreboard again with just under ten minutes to go, with the lap times now down into the 1:43s. Kajaia looked set to end the session quickest until Serbia’s Dusan Borkovic popped in a time of 1:43.041 on his final run to take over. Kajaia had one lap to respond, and although the Engstler Motorsport driver was able to find another six-tenths of a second, it wasn’t enough, and he had to settle for second overall, just 0.066 behind Borkovic.

Kajaia still was the fastest in the TC2T class by some way, with his closest rival, Borusan Otomotiv Motorsport’s Aytac Biter tenth fastest, almost three seconds behind.

Borkovic, fastest overall and in the SMT class, was just ahead of his his class and championship rivals, with Mat’o Homola third, 1.2 seconds slower, with Petr Fulín fourth, just a few hundredths behind.

Nicklas Mackschin was the best placed of the Super 1600 class drivers, 14th overall in his Ford Fiesta 1.6, ahead of Gilles Bruckner and Ulrike Krafft.

Qualifying is up next and is due to get underway at 15:00 CET.