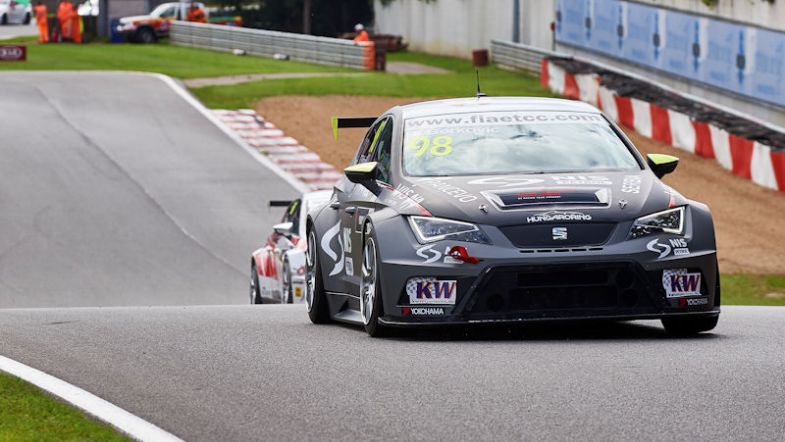 Dusan Borkovic claims his fifth win of 2015 at Zolder

Dusan Borkovic has claimed his fifth win of the 2015 European Touring Car Cup at Zolder, and leaves the Belgian circuit with almost the same points advantage as when he came in, with 21 points over Slovakia’s Mat’o Homola after a hectic second race.

Ronny Jost started from pole position courtesy of the the reversed grid, but was challenged by the two TC2 class cars of Ibrahim Okyay and Peter Rikli into Turn 1, with Okyay’s BMW charging down the inside and Rikli past his right. Okyay took the lead into Turn 1, but Rikli grabbed the spot back from him at Turn 2, with Jost soon moving up to second ahead of the Turkish driver.

Rikli led the race for the first two laps in his Honda Civic whilst challenged by Jost’s SEAT, with the fellow Swiss driver finally able to get past on lap three to take the lead.

B3 Racing driver Dusan Borkovic was now up to third after starting fifth on the grid, and was quick to follow Jost through with his SEAT to move ahead of Rikli’s Civic to grab second. Rikli continued to fight his position, but a mistake on lap four saw him slide to eighth, losing the TC2 class lead in the process to Michal Matejovsky’s BMW.

Petr Fulín was now up to third in the Krenek SEAT, with race one winner Mat’o Homola just behind him, with Engstler driver Davit Kajaia fifth. While Homola made a lunge on Fulín on lap six, he was caught off guard and was passed by Kajaia, but an error by the Georgian saw him go off circuit and through the gravel, dropping down to eighth and then slowly fell back down the order, much as he had in race one.

On the same lap, Borkovic was able to dispatch Jost’s SEAT for the overall lead and start to build a margin, while Homola’s battle with Fulín resumed and raged on for another six laps, before Homola finally got ahead of the Czech driver with two laps to go.

Borkovic went on to take his fifth win of the year with a margin of almost five seconds over Jost, and move to 21 points clear of Homola in the Single-Make Trophy class heading to the final round of the ETCC at Pergusa on October 11th.

Nicklas Mackschin took the win in the S1600 class, his ninth of the season, and now leads the class by 36 points over Ulrike Krafft with just 46 available from the double points Pergusa finale next month.