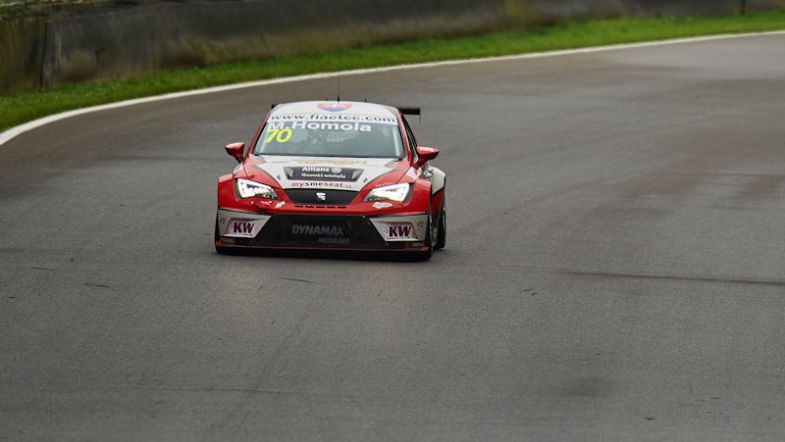 Mat’o Homola took his second win of the season in the European Touring Car Cup at Zolder, capitalising on a problem for Engstler Motorsport’s David Kajaia, who slowed with a mechanical issue with just three laps to go from a commanding lead.

Georgian driver Kajaia was romping away to victory in the BMW 320 TC, building up a near five second margin over the Slovakian, before what looked like a transmission component shook loose from the car at Turn 5 and he began to lose time, and was passed by the cars behind him.

There was drama on the first lap as the SEAT of Andreas Pfister, the BMW of Ümit Ülku and the Honda of Daniel Conrad all came together, with Conrad out of the race and Ülkü rejoining three laps down, while Pfister returned to the pits.

The incident is under investigation by the stewards.

Dusan Borkovic lost a spot to Petr Fulín’s SEAT at the start, and the Serbian was forced to chase the Czech driver throughout the duration of the race and finish in what would eventually be third after Kajaia’s troubles.

Aytac Biter had worked his way up to sixth and was holding of Ronny Jost’s TopCar SEAT, with the Swiss driving trying his utmost to get ahead of the Borosun Otomotiv driver. In doing so, Jost exceeded the track limits on too many occasions and was given a drive-through penalty which meant he’d finish eighth overall but made no different to his position in the Single-Make Trophy class.

With two laps to go, the officials then handed out a black flag to Turkish driver Ümit Ülku for reasons as yet unclear, but perhaps related to his recovery from the gravel on the first lap. As he did not return to the pits before the end of the race, he has been officially excluded from the race.

Homola’s win sees him close the gap to just 17 points to Dusan Borkovic ahead of the second race, which will see Ronny Jost start from pole with the reversed top eight.

In TC2, Michal MAtejovsky took his eighth win of the season with fourth overall in the Krenek BMW 320si, while Aytac Biter took his first win of the the year in TC2T thanks to Kajaia’s troubles, with Kajaia dropping all the way back to ninth.

In S1600, Nicklas Mackschin took another victory, his eighth from nine races, but with Ulrike Krafft finishing fourth, he cannot be confirmed as the S1600 champion until Pergusa, nor can Kajaia in the TC2T class, which was an outside possibility this weekend.