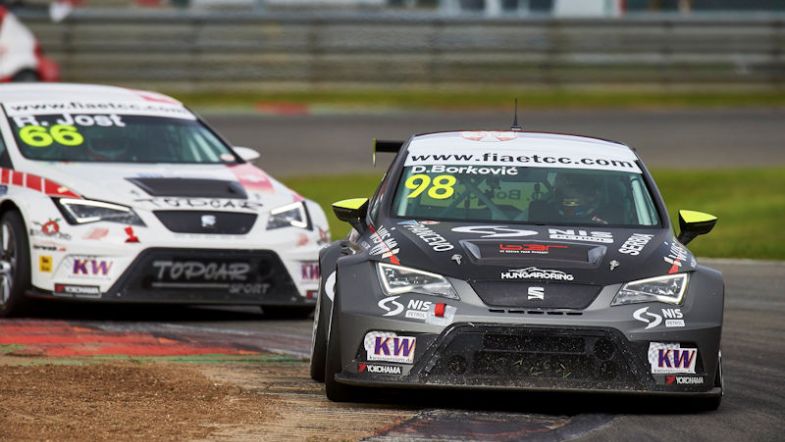 Serbia’s Dusan Borkovic clocked up his fifth win of the season in the second European Touring Car Cup race at Zolder, and although his Single-Make Trophy rival Mat’o Homola chipped away at his lead, reducing it to 21 points, the former WTCC driver feels confident heading to Italy for the finale next month.

Borkovic took a safe approach in qualifying in Belgium, which ultimately hurt his grid position as the rain began to fall after just five minutes, but after a battle with championship rival Homola at the start, his challenge for victory was over following contact on the opening lap.

“I said I wanted to be more relaxed, but I saw a little gap next to Homola at the second corner and I tried to go inside but it wasn’t possible and he closed the door,” said Borkovic to TouringCarTimes. “Then we touched each other, he hit my front-left wheel and the toe on the wheel was terrible. I realised that the steering wheel was going to the right and the car to the left, so I knew it would be a tough race, so I just wanted to finish as the car was not driveable.”

The team fixed the problem for race two, and starting sixth on the reversed grid, the Serbian was able to work his way forward to take the lead after six laps, depriving fellow SEAT driver Ronny Jost of the shot of victory.

“I was a bit more relaxed as I was driving like I know,” said Borkovic. “I seem to make more mistakes when I’m driving slower than when I’m pushing. The race was really good, but I still feel the difference between me and the other drivers, as I’m heavier than them and I feel that,” he added.

With the minimum running weight of the Single-Make Trophy cars not factoring in the weight of the driver, the difference between the driver’s weight is also a factor. The points-based success ballast system also played its part with Switzerland’s Ronny Jost the only driver not to be carrying the maximum ballast of 50kg this weekend.

“I have three to five tenths to find every lap,” said Borkovic. “I caught Jost, but he didn’t have ballast so he was much faster in acceleration.”

Borkovic wasn’t upset about seeing his gap eroded by one point over the course of the weekend, and feels confident going to the next round. The Serbian can afford to qualify just one position behind Homola in Pergusa and then as long as he’s able to finish ahead of him on the road, he can win the title in the first race at the Sicilian circuit.

“If I hadn’t made that mistake where I touched Homola and lost the place to Fulín, I’d have been the top scoring SEAT this weekend,” said Borkovic. “In Pergusa I’ll just aim to finish the races and I should win the title. I have five wins from five weekends, so it’s been good.”