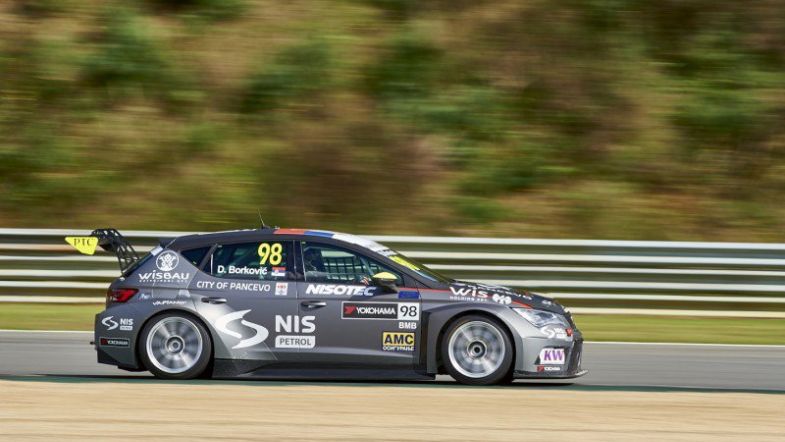 Dusan Borkovic was again the fastest man in the Free Practice session that took place at Pergusa, host of the final round of the 2015 FIA European Touring Car Cup season. The Serbian topped the timing charts with a time of 1:49.578, three tenths slower than this morning’s register.

Borkovic’s main rival for the title in the SMT class, Slovakian Mat’o Homola, was second, just 0.079 seconds behind the Serbian. Petr Fulín, also with a SEAT Leon Racer, was third, 0.340 seconds off the pace.

Franz Engstler, in a one-off appearance to score points for the Nations’ Cup, was able to break the dominance of the SMT cars, putting his TC2T BMW 320 in fourth position, ahead of Andreas Pfister and Ronny Jost, both with SEAT.

Davit Kajaia, leader in the TC2T standings, was seventh overall and second fastest in his class, with TC2’s Peter Rikli immediately behind in his Honda Civic FD 2.

Ulrike Krafft, who has a slim shot to fight for the title, took to the track for the first time today to be 14th and fastest in the Super 1600 class. Gilles Bruckner was second, with standings leader Niklas Mackschin in third.

The session was red flagged after 10 minutes, as Gilles Bruckner went into the gravel trap, with his Ford Fiesta 1.6 having to be recovered by the marshals.

The ETCC will return to the track tomorrow at 8:00, for the half-hour qualifying session.