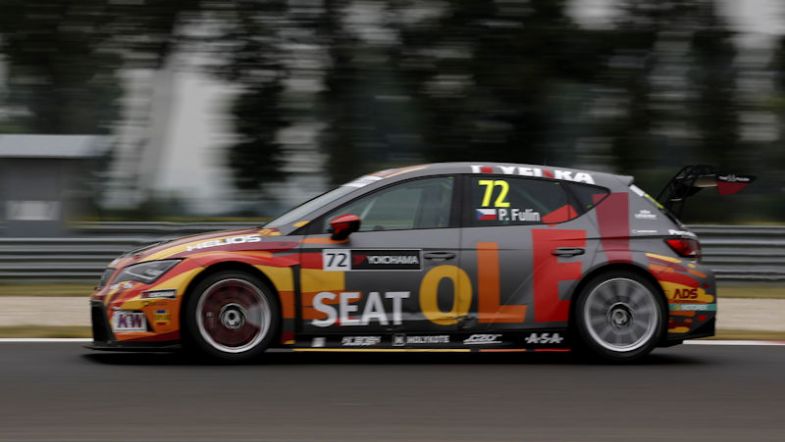 The Single-Make Trophy cars dominated the delayed Testing 2 session, which took place at Enna Pergusa, host of the sixth and final round of the 2015 FIA European Touring Car Cup. Petr Fulin set the fastest time in damp conditions, ahead of Mat’o Homola.

Testing 2 kicked off the ETCC action, after the first one had been cancelled due to bad weather and floods. The session was largely trouble-free, except for a brief red flag due to Swiss driver Daniel Conrad going off and being stuck in a gravel trap.

Petr Fulin set the fastest time of 1:51.108, 0.355 seconds ahead of Mat’o Homola. The Single-Make Trophy drivers, in the class reserved for the SEAT León Cup Racer, had the advantage in the damp conditions. Andreas Pfister was third, with standings leader Dusan Borkovic in fourth, albeit 0.960 seconds off Fulin’s time. Ronny Jost was fifth overall.

Davit Kajaia was sixth overall and fastest in the TC2T class, 3.681 seconds off the pace. The standings leader was 1.444 seconds faster than Ümit Ülkü.

Peter Rikli was eighh overall and fastest in the TC2 class, with standings leader Michal Matejovsky failing to set a time.

The leader in the Super 1600 class Niklas Mackschin was the only one in his group to make it to the track, completing only five laps to set a best time of 2:11.819.