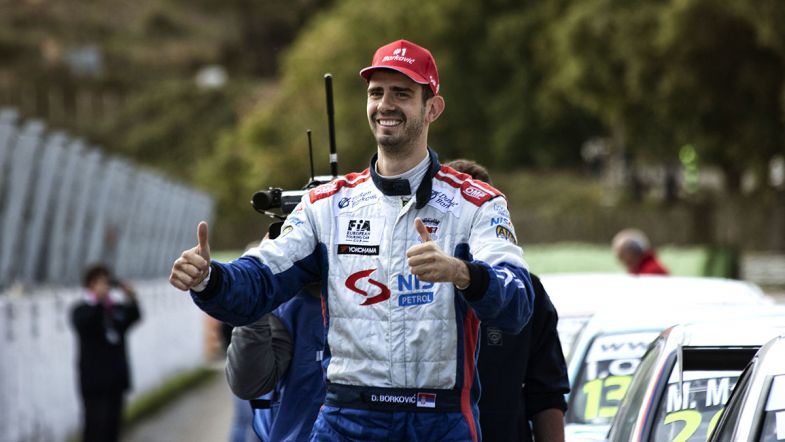 Dusan Borkovic elated at winning the title after a dramatic weekend

Dusan Borkovic clinched the 2015 FIA European Car Cup title in the Single Make Trophy class today in Pergusa. The Serbian’s run wasn’t exempt from problems, having to fight against the circumstances until the last lap.

Borkovic arrived in Sicily with a healthy 21-point lead over Mat’o Homola and with Petr Fulín a further 8 points behind. It almost looked all set for the Serbian, whose rivals’ options went through the B3 Racing driver failing to score, their hopes raised by the double points award in the last racing weekend of the season.

Qualifying was plain sailing for Borkovic, who set the fastest lap of the weekend, also achieving a new lap record at the Enna Pergusa track for the series. When Mat’o Homola stopped in the opening stages of the first race, it all looked done for the number 98 driver.

However, nothing is won until you see the chequered flag, and the Serbian encountered his own drama, when a puncture made him go off and violently hit the barriers. Borkovic managed to limp his SEAT back to the pits, when a frenetic B3 Racing team did everything to repair his car, especially after Petr Fulín got himself back into contention by winning the first race.

The Serbian just focused on getting back on track for Race 2: “This was a real test for me and my team. I thought I was in the clear after qualifying and that I just needed to finish both races. I even broke the track record in qualifying. I knew I was fast and the car was great. My tyre punctured on the second corner on the second lap and I hit the wall really hard. My car was demolished. I was hurt but I wasn’t thinking to quit at any moment. I struggled to get the car to the pit but I had to so we can have at least a chance to repair it between the races. Fortunately I managed, and my team did a great job repairing the car until it was the time to start race two.”

Borkovic was able to make it back to the grid, starting from the back. The math was clear in his mind: the Serbian had to score points and, to do so, he had to complete, at least, 75% of the race.

After Mat’o Homola failed to make it to the grid, Borkovic focused on staying out of trouble and making it to the chequered flag, finishing in fourth position in the SMT class. Despite Fulín’s victory, the Serbian clinched the title by just three points.

Dusan Borkovic, who went back to the ETCC after an aborted season at the WTCC, was grateful to his team, but also to his sponsors and supporters, and is already looking ahead and working on his return to the world stage: “Guys did excellent job, they are the heroes of the day. I want to thank everybody who supported me this season, my sponsors and fans. I proved that I belong in the world class and I hope we will manage to find the budget because we already have many offers to continue racing on the world level.”