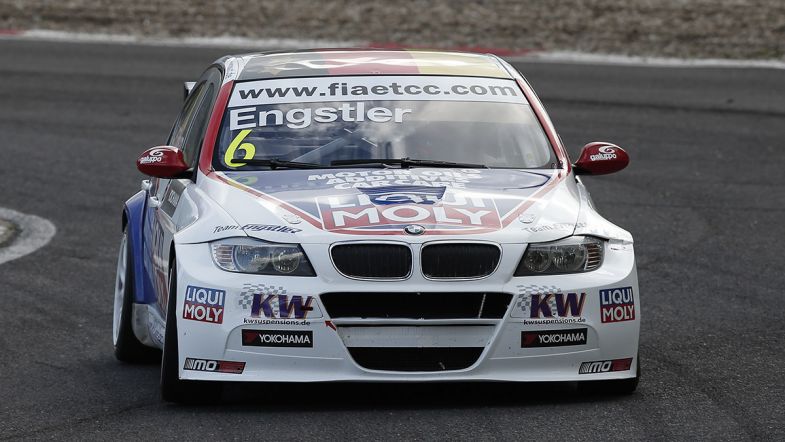 Franz Engstler and team-mate Davit Kajaia had a thrilling fight to take a 1-2 finish for Liqui Moly Team Engstler in Race 2 of the FIA European Touring Car Cup in Enna Pergusa today, host of the sixth and final round of the 2015 season, while Dusan Borkovic took his repaired SEAT León to finish in fourth position in the SMT class to secure the title.

Mat’o Homola continued to suffer with problems as experienced in Race 1, and was unable to make it to the grid. While B3 Racing was able to repair Dusan’s Borkovic SEAT in time for the second race. With the Slovakian not taking part, the Serbian just needed to finish the race in fourth position to win the SMT title.

Aytac Biter started from pole position in the Borusan Otomotiv BMW 320 TC and was the leader at the green lights, followed by team-mate Ibrahim Okyay. However, Franz Engstler was on a charge and managed to climb up to the lead by the end of the first lap.

The heat was on the Single-Make Trophy class, the only title left to be decided. Ronny Jost was leading the category, with Petr Fulín in second. Andreas Pfister was in third, and attacked the Czech driver for the position, managing to overtake. It all seemed lost for Fulín at that point, but the Krenek Motorsport driver didn’t give up.

Soon enough the SMT cars caught up to the TC2s, with Biter making it difficult for the others to overtake. Fulín saw a chance and attacked Pfister at the chicane, climbing to second position. The German driver vented his frustration, flashing his lights to Aytac Biter, but Fulín was already on a charge to catch Jost.

Petr Fulín took the lead of the SMT class, with Jost hitting the tyre barrier at the inside of the chicane a few laps later. The Swiss driver was able to remain in the race.

Up front, Davit Kajaia tried to put pressure on Franz Engstler, forcing him to make a couple of mistakes. Still, the veteran German driver was able to win the race, with the Georgian in second place. Fulín was third overall and winner in the SMT class, followed in the classification by Andreas Pfister and Ronny Jost.

Peter Rikli was sixth overall and winner in the TC2 class in his Honda Civc, just ahead of 2015 champion Michal Matejovsky. Aytac Biter was eighth, followed by TC2T driver Umit Ulku and TC2’s Ibrahim Okyay completing the overall top ten.

Dusan Borkovic had an uncomplicated race to finish in 13th place overall, fourth in the SMT class, which gave him the 2015 title.

Nicklas Mackschin and Gilles Bruckner had a thrilling fight, under the close watch of Ulrike Krafft, for the victory in the S1600 class, with the 2015 champion prevailing at the chequered flag.

Enna Pergusa was the sixth and last appointment of the 2015 FIA European Touring Car Cup season, the longest in the series history.