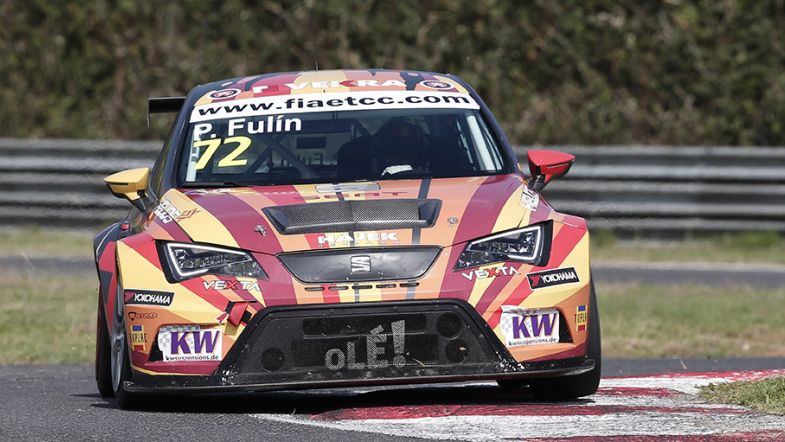 Petr Fulín has won the first race in Enna Pergusa, host of the sixth and final round of the 2015 FIA European Touring Car Cup season. The Czech driver led most of the race and now is in a strong position to challenge for the SMT title.

Sunny skies and a dry track welcomed the ETCC field for the first race of the day. At the rolling start, Petr Fulín gained a position, overtaking Mat’o Homola on the first corner.

The dramas started soon during the first lap, when Mat’o Homola’s SEAT stopped on the track, leaving the SMT title on Dusan Borkovic’s lap. Franz Engstler, leading driver in TC2T, spun on the track, being narrowly avoided by his pursuers.

One of the defining moments of the race came a few corners later, when Borkovic suffered a puncture, crashing into the barriers and seriously damaging his SEAT León. The Serbian was able to make it back to the pits, where the attempts to repair his car started almost immediately.

Fulín was now the leader, ahead of Pfister. Further behind, Petr Rikli was leading in the TC2 class, with Michal Matejovsky in second position. Franz Engstler had managed to recover and was leading in TC2T, but with team-mate and standings leader Davit Kajaia closing in from behind.

The Georgian driver soon overtook his team owner and went off into the distance, closing the gap to Petr Fulín, who had a comfortable gap.

The second half of the race was marked by the fight for the lead in the Super 1600 class, with Gilles Bruckner being challenged by Niklas Mackschin. Ulrike Krafft had already retired from the race, which left the German driver as the title winner.

Davit Kajaia closed the gap to Fulín during the last lap, with the Czech driver winning by just 0.350 seconds over the Georgian, who was the winner in the TC2T class, securing the class title.

Franz Engstler was third overall, with Top Car’s Ronny Jost in fourth and Honda driver Peter Rikli in fifth, and the TC2 class winner. Michal Matejovsky was sixth overall and second in the class reserved for the older two-litre aspirated engines, and also secured the 2015 crown.

The double points in the final round mean that Petr Fulín has now closed the gap to just 13 points behind Dusan Borkovic in the SMT class. The Serbian’s car is being repaired, but the NIS driver will need to take the start in Race 2 to defend his lead, where he will start from the back of the grid, while Fulín starts eighth with the reverse grid.

Race 2 is scheduled for 13:00, with the two Borusan Otomotiv BMWs starting on the front row.