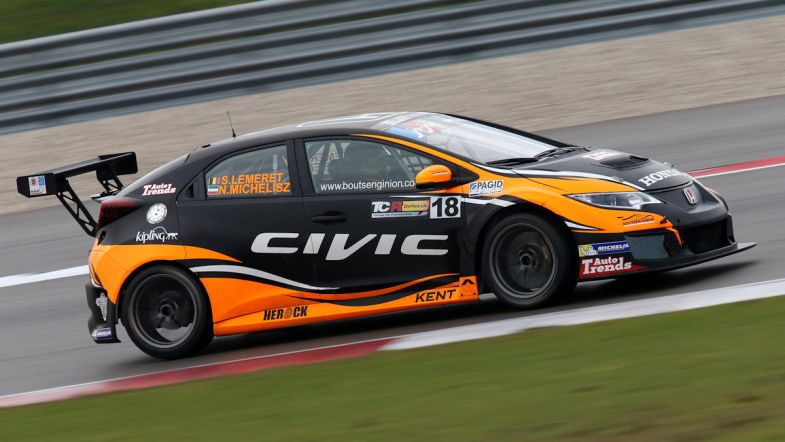 Norbert Michelisz won the final race of the weekend at Circuit TT Assen, finishing just ahead of his Boutsen-Ginion Honda team-mate Tom Coronel, and scored the maximum points possible in the championship for co-driver Stéphane Lémeret.

Michelisz started from pole position ahead of Coronel courtesy of his Race 3 victory, and after a short safety car intermission to regroup the field, the Hungarian led the way throughout the race ahead of his WTCC rival, for most of the race running less than a second ahead of the Dutchman in the identical JAS Motorsport-developed Honda Civic TCR.

Falling behind the duo, but running in a comfortable third place was Delahaye Racing’s Amaury Richard, while Benjamin Lessennes in the third Boutsen Honda was on a charge through the field after starting ninth, working his way up to fourth after passing the Delahaye Volkswagen of Alexis van de Poele on lap six, but couldn’t overcome the gap to Richard.

Michelisz and Lémeret’s victory was key in the championship, with all three of their main contenders failing to make the start of Race 4. Loris Hezemans’ Volkswagen Golf (sharing with title hopeful Maxime Potty) stopped at the start of the race, while Denis Dupont’s SEAT and Opel driver Pierre-Yves Corthals both missed the race after separate incidents in Race 3.

Lémeret’s championship lead is now 81.5 points heading to next weekend’s season finale at the Circuit Jules Tacheny in Mettet, Belgium.