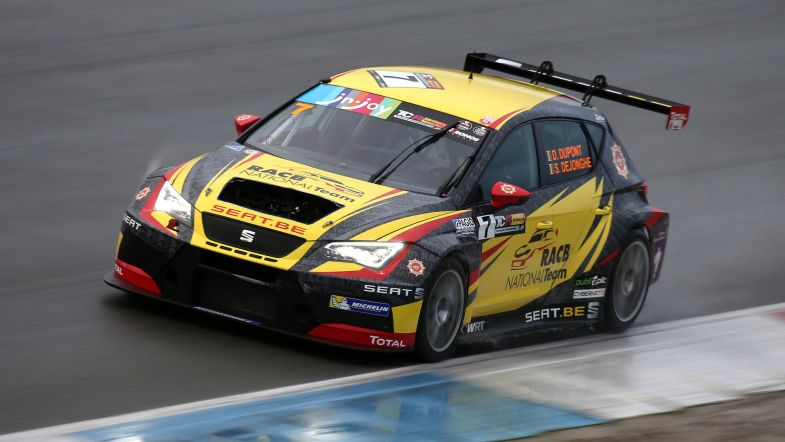 Sam Dejonghe took his second sprint win of the season at a wet TT Circuit Assen in The Netherlands, finishing ahead of Team WRT team-mate Mathieu Detry, but Detry’s drive-through penalty in Race 1 has now almost ended the #52 entry’s championship charge.

Detry was given a 30-second penalty for contact with Boutsen Ginion Honda driver Tom Coronel in Race 1, and was dropped to seventh in he result and on the grid.

Dejonghe started from pole and led the way ahead of Mika Morien’s Audi, while Coronel was in third, defending from Detry’s Volkswagen, who’d leapt forward off the line.

Detry overtook Coronel for third on lap two, and closed in on Morien’s Audi, taking second on lap three, all the while Dejonghe had been able to build up a comfortable lead.

A lap later and Coronel put his Honda back in the podium positions, passing Morien’s Audi, who slowly dropped down the order and was passed by his team-mate Willem Meijer later on the lap.

The positions then settled down, with Dejonghe taking the win by nearly two seconds ahead of Detry, leading a Team WRT 1-2, with Tom Coronel completing the podium.

The two Audis followed, with Edouard Mondron scoring key points in sixth, while the Peugeot 308 of Kevin Abbring, getting its first track time of the weekend, finished a distant seventh.

Coronel’s co-driver Benjamin Lessennes now has a healthy 26-point lead over Mondron with 50 remaining from the day’s final two races. Detry and co-driver Maxime Potty are still in content, but will need to win both races with Lessennes having a DNF in both to overturn their 47-point defecit, while Peugeot’s charge has ended, now 52 points behind and out of the equation.

Race 3 is scheduled for 17:00 CET, with Audi’s Rik Breukers on pole position.